The Use of Essential Oils from Thyme, Sage and Peppermint against Colletotrichum acutatum

Bryo-Activities: A Review on How Bryophytes Are Contributing to the Arsenal of Natural Bioactive Compounds against Fungi

Usually regarded as less evolved than their more recently diverged vascular sisters, which currently dominate vegetation landscape, bryophytes seem having nothing to envy to the defensive arsenal of other plants, since they had acquired a suite of chemical traits that allowed them to adapt and persist on land. In fact, these closest modern relatives of the ancestors to the earliest terrestrial plants proved to be marvelous chemists, as they traditionally were a popular remedy among tribal people all over the world, that exploit their pharmacological properties to cure the most different diseases. The phytochemistry of bryophytes exhibits a stunning assortment of biologically active compounds such as lipids, proteins, steroids, organic acids, alcohols, aliphatic and aromatic compounds, polyphenols, terpenoids, acetogenins and phenylquinones, thus it is not surprising that substances obtained from various species belonging to such ancestral plants are widely employed as antitumor, antipyretic, insecticidal and antimicrobial. This review explores in particular the antifungal potential of the three Bryophyta divisions—mosses (Musci), hornworts (Anthocerotae) and liverworts (Hepaticae)—to be used as a sources of interesting bioactive constituents for both pharmaceutical and agricultural areas, providing an updated overview of the latest relevant insights. View Full-Text
Keywords: bryophytes; plants bioactive compounds from early-diverged land; natural antifungals; plant extracts; mosses; liverworts; hornworts bryophytes; plants bioactive compounds from early-diverged land; natural antifungals; plant extracts; mosses; liverworts; hornworts
►▼ Show Figures 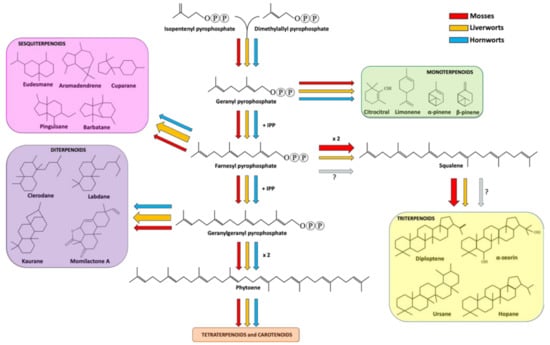