Verticillium wilt is a major disease that severely affects eggplant production, and a new eggplant miRNA named miRm0002 identified through high-throughput sequencing was highly induced by Verticillium wilt infection. However, the miRm0002 function was still elusive. In this study, the sequence of the miRm0002 precursor was cloned and transgenic eggplants were constructed. In vivo inoculation test and in vitro fungistatic test showed that overexpressing miRm0002 lines were more resistant to Verticillium dahliae and inhibiting miRm0002 lines were more sensitive, compared to the wild-type (WT) control. Some physiological indicators were selected and the results showed that SOD, POD, and CAT activities were significantly increased in Verticillium wilt-infected overexpressing miRm0002 lines, indicating that the expression of miRm0002 activates the antioxidant system. QRT-PCR assay showed that the transcript expression of miRm0002 candidate target ARF8, a gene encoding auxin response factor was negatively related to miRm0002 in WT as well as transgenic eggplants. However, RLM-RACE mapping and degradome sequencing showed miRm0002 could not cleave the sequence of ARF8. Taken together, these data suggest that miRm0002 plays a positive role in the defense response of eggplant against Verticillium wilt. View Full-Text
Keywords: Solanum melongena L.; miRm0002; Verticillium wilt; defense response Solanum melongena L.; miRm0002; Verticillium wilt; defense response
►▼ Show Figures 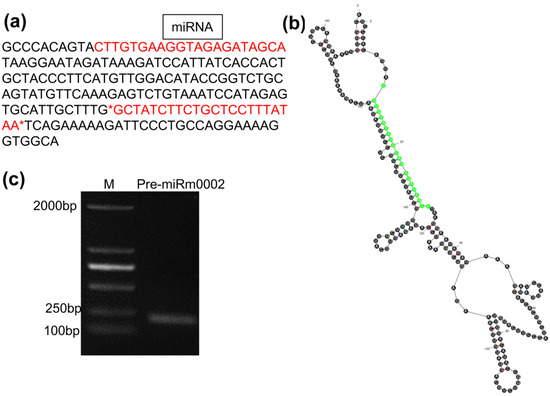