PA28αβ: The Enigmatic Magic Ring of the Proteasome?
Next Article in Special Issue

Structure and Function of the LmbE-like Superfamily

Prion disorders are a group of fatal neurodegenerative conditions of mammals. The key molecular event in the pathogenesis of such diseases is the conformational conversion of prion protein, PrPC, into a misfolded form rich in β-sheet structure, PrPSc, but the detailed mechanistic aspects of prion protein conversion remain enigmatic. There is uncertainty on the precise physiological function of PrPC in healthy individuals. Several evidences support the notion of its role in copper homeostasis. PrPC binds Cu2+ mainly through a domain composed by four to five repeats of eight amino acids. In addition to mammals, PrP homologues have also been identified in birds, reptiles, amphibians and fish. The globular domain of protein is retained in the different species, suggesting that the protein carries out an essential common function. However, the comparison of amino acid sequences indicates that prion protein has evolved differently in each vertebrate class. The primary sequences are strongly conserved in each group, but these exhibit a low similarity with those of mammals. The N-terminal domain of different prions shows tandem amino acid repeats with an increasing amount of histidine residues going from amphibians to mammals. The difference in the sequence affects the number of copper binding sites, the affinity and the coordination environment of metal ions, suggesting that the involvement of prion in metal homeostasis may be a specific characteristic of mammalian prion protein. In this review, we describe the similarities and the differences in the metal binding of different species’ prion protein, as revealed by studies carried out on the entire protein and related peptide fragments. View Full-Text
Keywords: prion; copper; metal ions; chicken; mammal; peptide; coordination chemistry; neurodegeneration prion; copper; metal ions; chicken; mammal; peptide; coordination chemistry; neurodegeneration
►▼ Show Figures 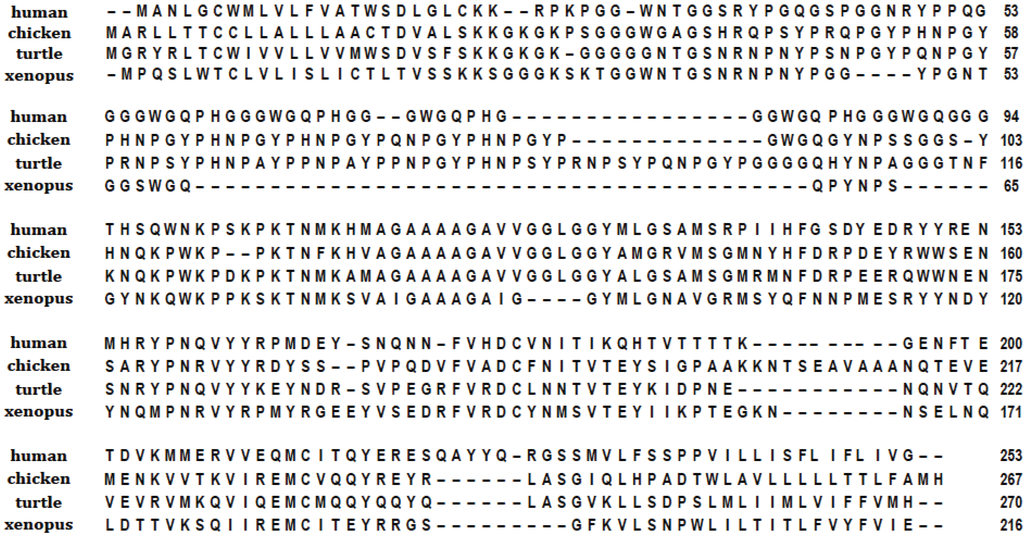