Hormonal Regulation of Oligodendrogenesis I: Effects across the Lifespan

The brain’s capacity to respond to changing environments via hormonal signaling is critical to fine-tuned function. An emerging body of literature highlights a role for myelin plasticity as a prominent type of experience-dependent plasticity in the adult brain. Myelin plasticity is driven by oligodendrocytes (OLs) and their precursor cells (OPCs). OPC differentiation regulates the trajectory of myelin production throughout development, and importantly, OPCs maintain the ability to proliferate and generate new OLs throughout adulthood. The process of oligodendrogenesis, the creation of new OLs, can be dramatically influenced during early development and in adulthood by internal and environmental conditions such as hormones. Here, we review the current literature describing hormonal regulation of oligodendrogenesis within physiological conditions, focusing on several classes of hormones: steroid, peptide, and thyroid hormones. We discuss hormonal regulation at each stage of oligodendrogenesis and describe mechanisms of action, where known. Overall, the majority of hormones enhance oligodendrogenesis, increasing OPC differentiation and inducing maturation and myelin production in OLs. The mechanisms underlying these processes vary for each hormone but may ultimately converge upon common signaling pathways, mediated by specific receptors expressed across the OL lineage. However, not all of the mechanisms have been fully elucidated, and here, we note the remaining gaps in the literature, including the complex interactions between hormonal systems and with the immune system. In the companion manuscript in this issue, we discuss the implications of hormonal regulation of oligodendrogenesis for neurological and psychiatric disorders characterized by white matter loss. Ultimately, a better understanding of the fundamental mechanisms of hormonal regulation of oligodendrogenesis across the entire lifespan, especially in vivo, will progress both basic and translational research. View Full-Text
Keywords: oligodendrogenesis; hormones; mechanisms; steroids; peptides oligodendrogenesis; hormones; mechanisms; steroids; peptides
►▼ Show Figures 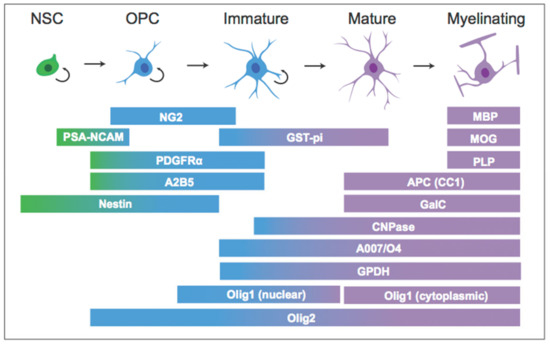