The investigation on the design of a differentially-fed coupled-line directional coupler has been carried out, based on the previously published work on the design of such directional couplers in homogeneous dielectric medium [11]. Here, we took the effort to verify the possibility of designing such directional couplers in inhomogeneous dielectric media, which is in particular useful, when microstrip structures are considered. A conceptual view of a four-strip coupled-line system is shown in Figure 1, whereas, proposed coupled-line geometry is presented in Figure 2, and consists of a base substrate, having thickness h4, a substrate having thickness h2 on which the traces of the coupler are etched. Moreover, two additional layers are present, among which the layer having thickness h3 is purely technological layer bonding the two layers h4 and h2 together, while the top layer is a compensating layer.
In the directional coupler’s design, the following procedure has been utilized:
The geometry has been iteratively optimized in order to obtain the required coupling coefficients and impedances of the conductor pairs.
In the first step of the design a coupled-line geometry has to be found for which the inductive coupling coefficient and characteristic impedances of the lines are as desired for the final coupler. Since the overlay dielectric layer h1 will be used for the compensation, the inductive coupling coefficient will not be modified. Additionally, when selecting an initial geometry without top compensating layer the capacitive coupling coefficient has to be greater than the inductive one, since the dielectric overlay will lower the capacitive coupling coefficient to be equal to inductive one. For our analysis the following parameters of the coupled line geometry have been found: h4 = 0.76 mm, εr4 = 4.5, h3 = 0.09 mm, εr3 =3.38, h2 = 0.05 mm, εr2 = 3.4, for which the above mentioned criteria are met.
In the second step the process of described iterative calculations is applied. In our calculations the following geometrical parameters have been found: the strip widths and the spacing for the top balanced line equal w1 = 0.345 mm, s1 = 1 mm, and the strip widths and spacing for the bottom balanced line are w2 = 0.315 mm, s2 = 0.6 mm. Furthermore, the top dielectric layer has been optimized in order to equalize capacitive and inductive coupling coefficients and the following values have been obtained: h1 = 0.787 mm, εr1 = 2.5. The optimized geometry features differential characteristic impedance Z0 = 100 Ω and coupling coefficients kL = kC = 0.705.
The overlay dielectric layer h1 provides for capacitive and inductive coupling coefficients’ equalization, which is a necessary condition for the realization of an ideal coupled line section [15], and hence it is a necessary condition to obtain good isolation and impedance match of the coupled-line section. To illustrate the compensating effects of the top dielectric layer on the chosen coupled-line geometry the influence of the layer’s thickness and dielectric constant have been calculated and the results are shown in Figure 3.
As it is seen both the thickness and the dielectric constant of the top layer influence the capacitive coupling coefficient. The inductive coupling coefficient is not influenced, since it depends on conductor geometry only, and can be calculated from the capacitive matrix of the homogeneous air filled geometry (not depending on any dielectric properties). The application of additional dielectric layer lowers the capacitive coupling coefficient and it is required to adjust the parameters h1 and εr1 to obtain equity of both inductive and capacitive coefficients.
The designed coupled-line geometry has been further investigated and scattering parameters of a coupled line section have been calculated electromagnetically with the AWR Microwave Office software. The results are shown in Figure 4 with comparison to the equivalent section with removed compensating top dielectric layer. As it is seen, the application of the compensating layer improves the isolation and impedance match by about 20 dB. Further, the scattering parameters of the complete directional coupler with transitions between coupled and uncoupled lines have been calculated electromagnetically, and are shown in Figure 5. The designed directional coupler features equal power split between direct and coupled ports (k ≅ 0.7), the return losses and isolation are better than 40 dB at the center frequency.
Finally, the directional coupler has been fabricated and measured with the Keysight PNA-X N5224 four port vector network analyzer. The analyzer has been calibrated at the male connector planes with the Short-Open-Load-Through calibration technique and Keysight 85052D manual calibration kit. The single-ended measurement results have been recalculated to the differential ones and are presented in Figure 6. The obtained return losses are not worse than 22 dB, whereas the isolation is better than 20 dB. The coupler features equal power split. The conversion losses between differential and common modes are better that 25 dB at the center frequency and the total losses do not exceed 0.4 dB at the center frequency. The difference between measured and simulated results, especially in terms of return loss and isolation levels may result from the fact that additional transmission line sections have been added to the fabricated model to allow for connector attachment. The lines have been de-embedded from the measured results. Further, the connector-microstrip line transitions were not included in the simulations, which can introduce additional mismatch seen in the measured results, and also the limited accuracy of lithography process can have impact on the coupled-line geometry modifying the characteristic impedances of the coupled lines. The picture of the fabricated model is shown in Figure 7.

A novel differential bi-level microstrip directional coupler has been investigated. It was shown that such coupled-line sections can be successfully compensated, and capacitive and inductive coupling coefficients can be equalized with additional dielectric layer. The application of the additional layer lowers the capacitive coupling coefficient and the parameters of this layer can be selected for proper equalization. The theoretically investigated directional coupler has been fabricated and measured. The obtained measurement results are in agreement with the calculated ones. A noticeable deterioration of isolation and return losses is related to the mismatch at the coaxial-microstrip transitions and the limited manufacturing accuracy of the directional coupler.

This work was partially supported by the National Science Centre Poland under contract no. UMO-2016/21/B/ST7/02200 and in part by the Polish Ministry of Science and Higher Education under subvention funds for the Department of Electronics of AGH. 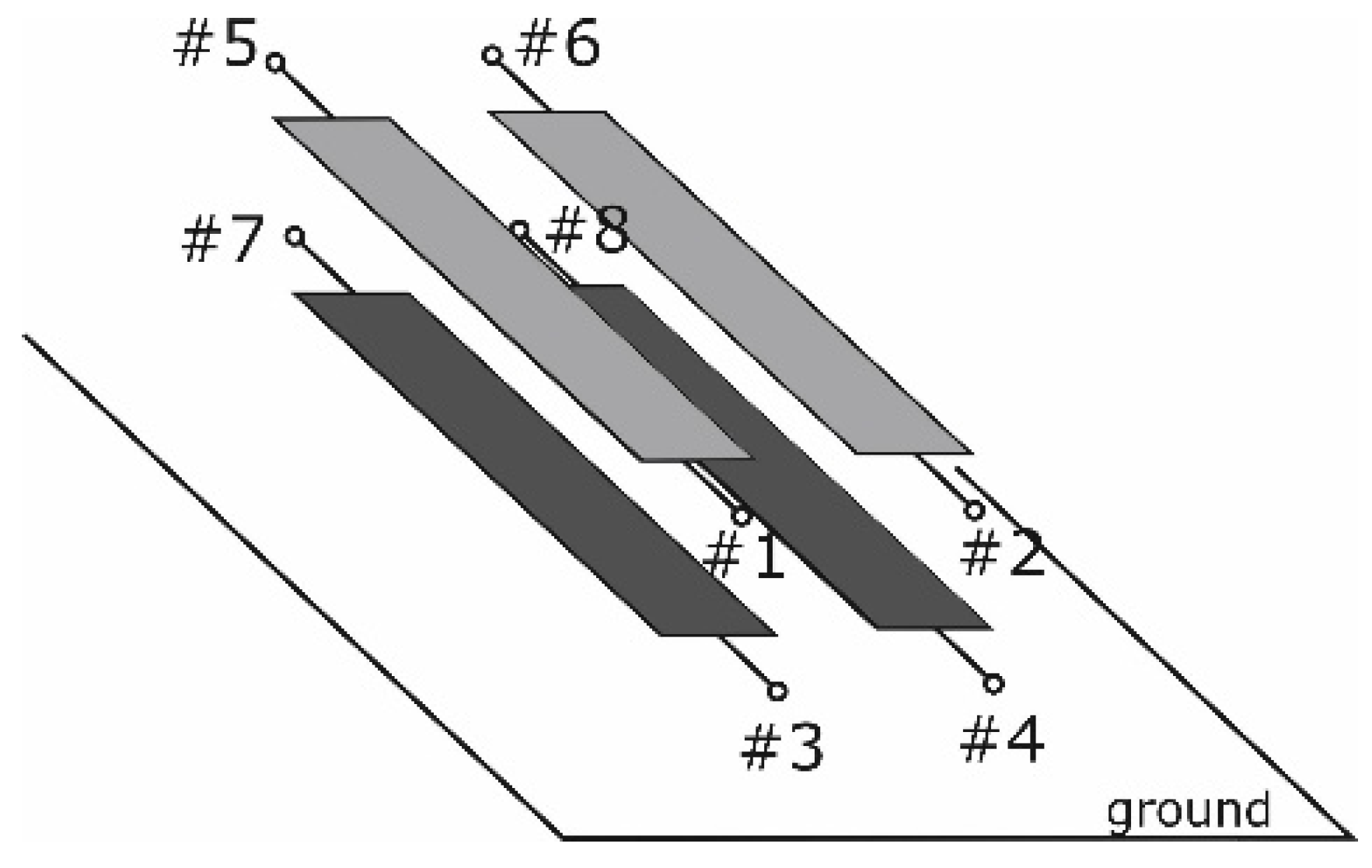 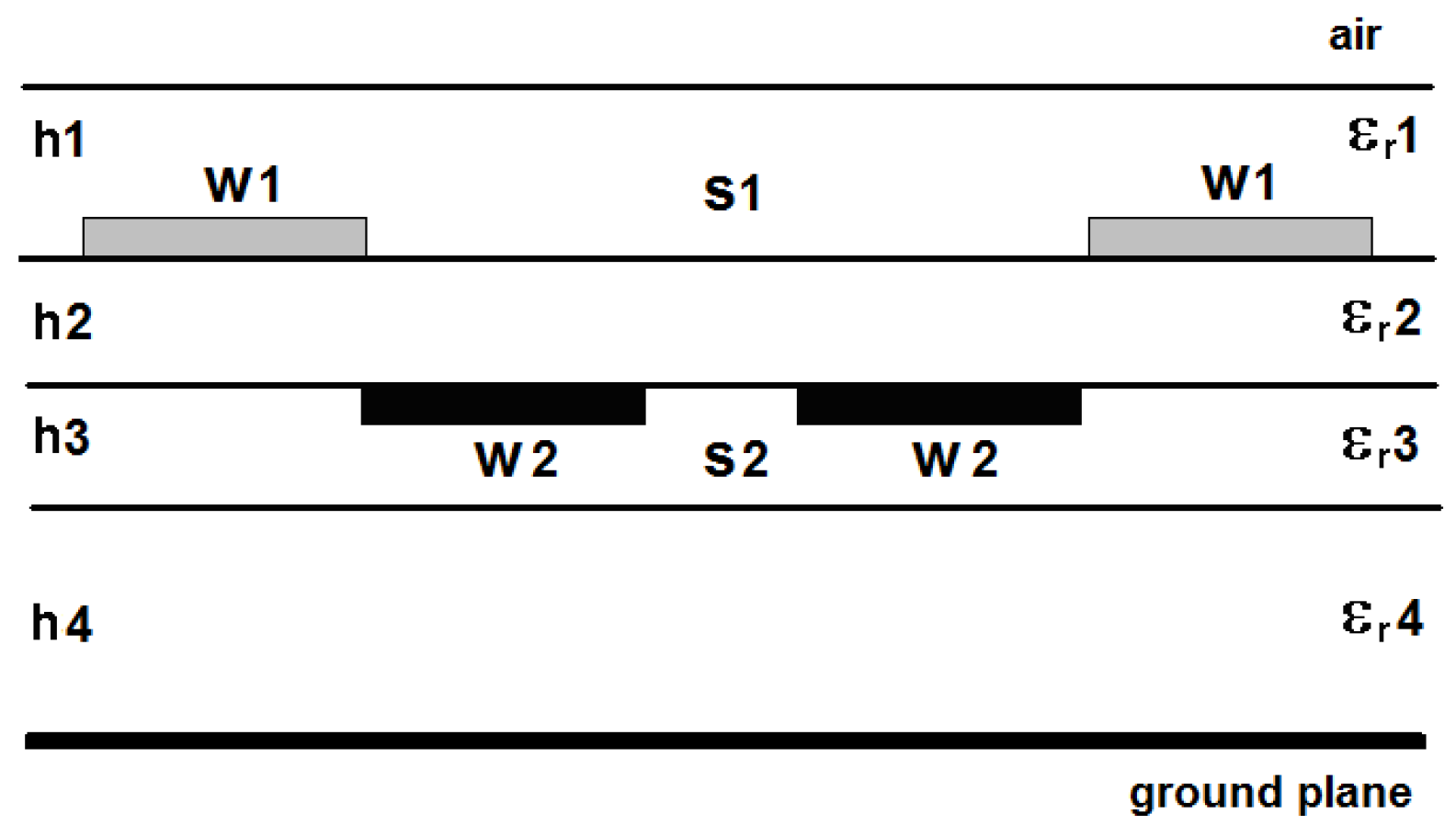 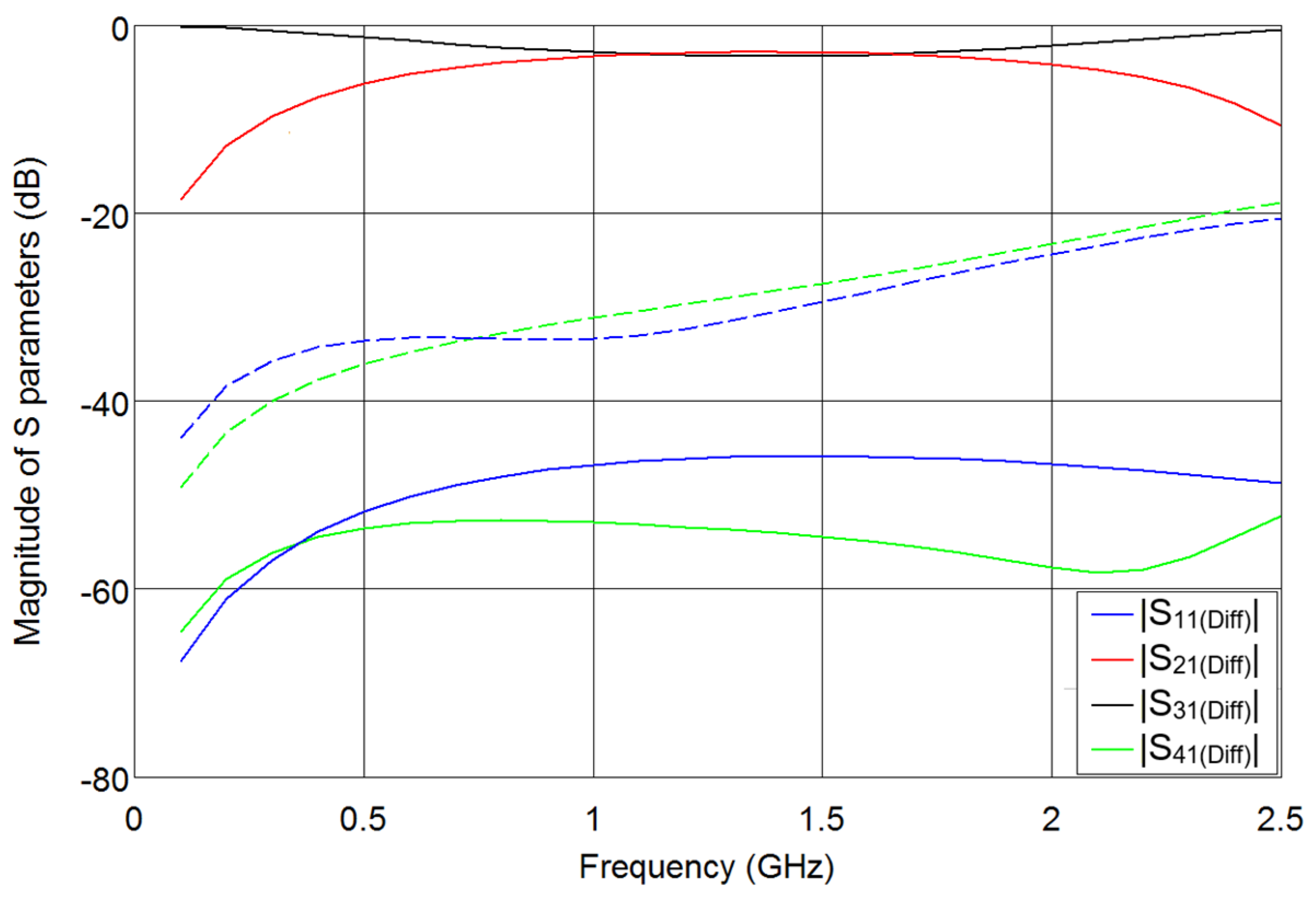 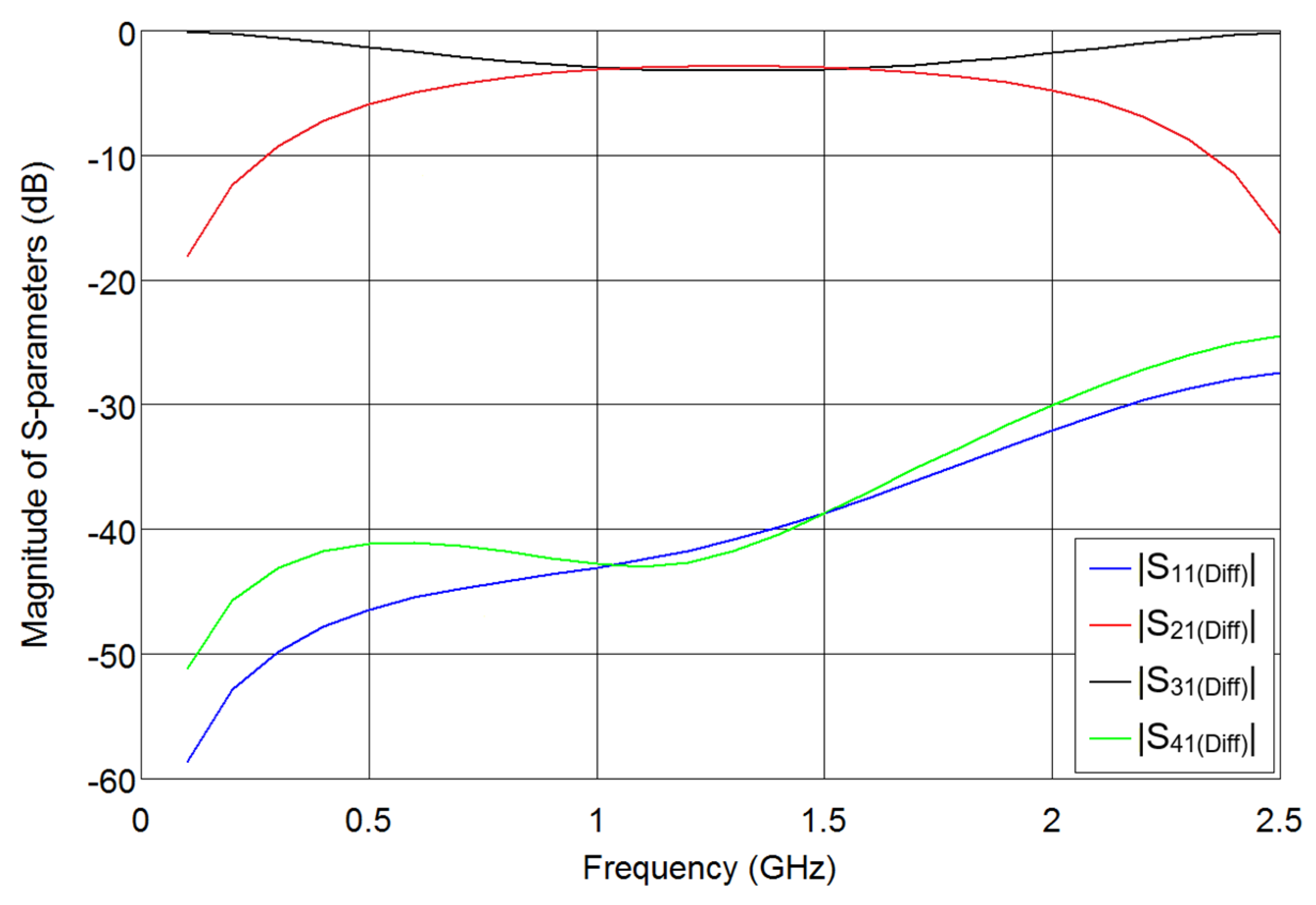 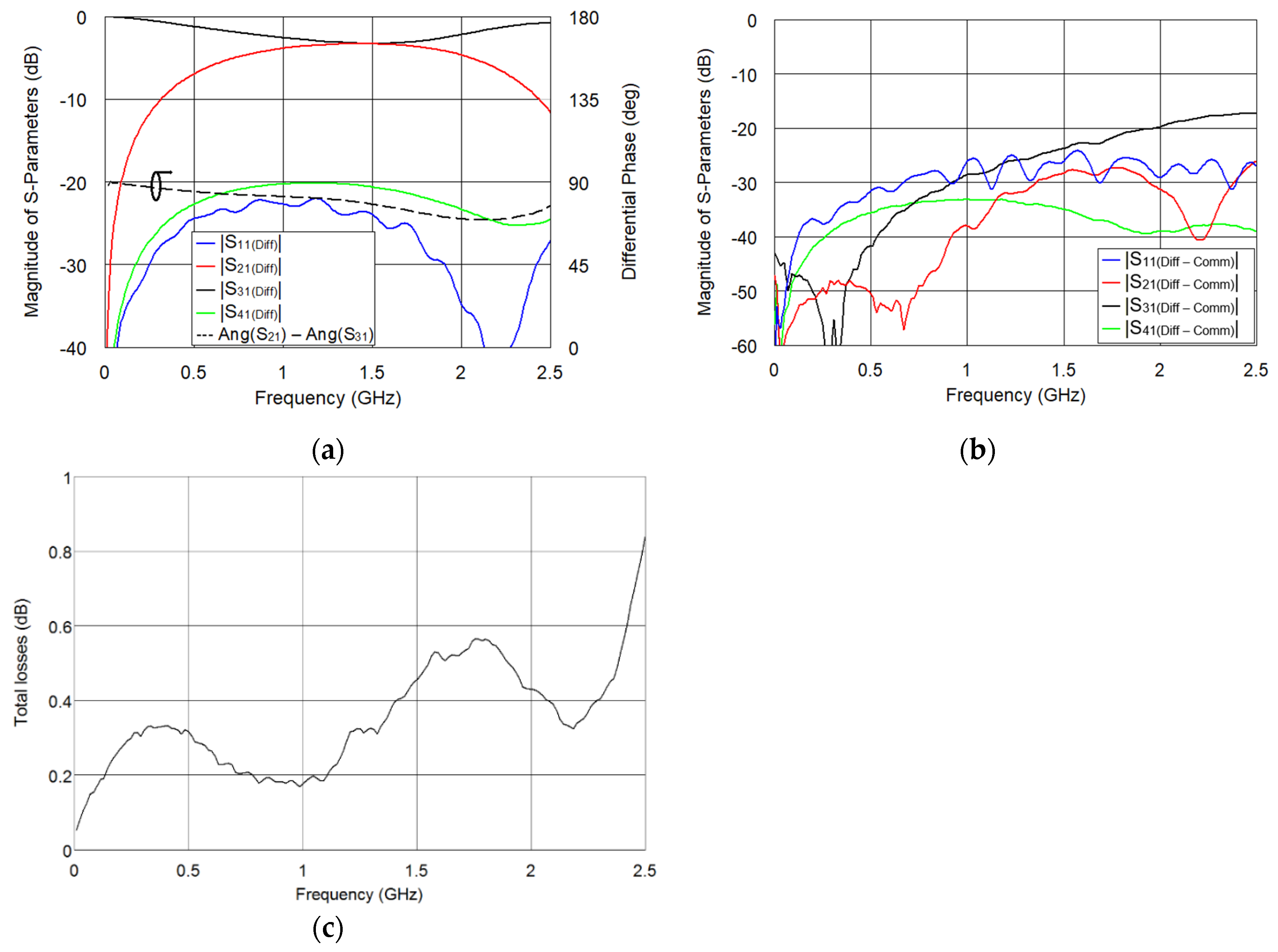