With the rapid expansion of intelligent resource-constrained devices and high-speed communication technologies, the Internet of Things (IoT) has earned wide recognition as the primary standard for low-power lossy networks (LLNs). Nevertheless, IoT infrastructures are vulnerable to cyber-attacks due to the constraints in computation, storage, and communication capacity of the endpoint devices. From one side, the majority of newly developed cyber-attacks are formed by slightly mutating formerly established cyber-attacks to produce a new attack that tends to be treated as normal traffic through the IoT network. From the other side, the influence of coupling the deep learning techniques with the cybersecurity field has become a recent inclination of many security applications due to their impressive performance. In this paper, we provide the comprehensive development of a new intelligent and autonomous deep-learning-based detection and classification system for cyber-attacks in IoT communication networks that leverage the power of convolutional neural networks, abbreviated as IoT-IDCS-CNN (IoT based Intrusion Detection and Classification System using Convolutional Neural Network). The proposed IoT-IDCS-CNN makes use of high-performance computing that employs the robust Compute Unified Device Architectures (CUDA) based Nvidia GPUs (Graphical Processing Units) and parallel processing that employs high-speed I9-core-based Intel CPUs. In particular, the proposed system is composed of three subsystems: a feature engineering subsystem, a feature learning subsystem, and a traffic classification subsystem. All subsystems were developed, verified, integrated, and validated in this research. To evaluate the developed system, we employed the Network Security Laboratory-Knowledge Discovery Databases (NSL-KDD) dataset, which includes all the key attacks in IoT computing. The simulation results demonstrated a greater than 99.3% and 98.2% cyber-attack classification accuracy for the binary-class classifier (normal vs. anomaly) and the multiclass classifier (five categories), respectively. The proposed system was validated using a K-fold cross-validation method and was evaluated using the confusion matrix parameters (i.e., true negative (TN), true positive (TP), false negative (FN), false positive (FP)), along with other classification performance metrics, including precision, recall, F1-score, and false alarm rate. The test and evaluation results of the IoT-IDCS-CNN system outperformed many recent machine-learning-based IDCS systems in the same area of study. View Full-Text
Keywords: deep learning; convolutional neural network; IoT networks; cyber-attack detection; classification deep learning; convolutional neural network; IoT networks; cyber-attack detection; classification
►▼ Show Figures 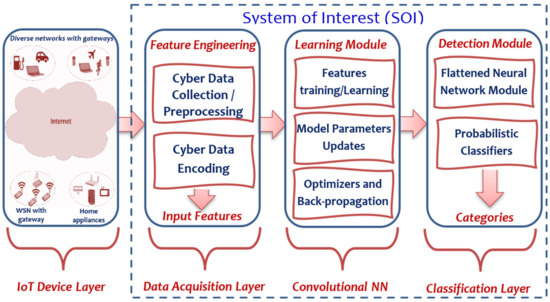