Polyamide Microparticles Containing Vitamin C by Interfacial Polymerization: An Approach by Design of Experimentation
Next Article in Special Issue

Green Nanotechnology Serving the Bioeconomy: Natural Beauty Masks to Save the Environment
Previous Article in Journal

The cosmetic product, according to the EU regulation, is defined as “any substance or mixture intended to be placed in contact with the external parts of the human body (epidermis, hair system, nails, lips and external genital organs) or with the teeth and the mucous membranes of the oral cavity with a view exclusively or mainly to cleaning them, perfuming them, changing their appearance, protecting them, keeping them in good condition or correcting body odours” [1]. There are about 25,000 ingredients that constitute cosmetic products, most of which can be grouped into oils, waxes, and fats—broadly defined as “lipids” [2]. Natural sources (e.g., plants and animal) still appear to be the preferred means of obtaining these ingredients over synthetic derivatives [2].
Lipids form an integral part of cosmetic products [3,4,5,6]. Their cosmetic applications are fundamentally determined by their physico-chemical properties. For instance, due to hydrophobic nature, they can act as a barrier against water-loss from the skin. Their viscosity and semi-solid consistency defines the spreadability, which is an important factor to fill small indentations on the skin surface imparting smooth and shiny appearance. Not only the melting point, but also the phase behavior of a lipid is crucial for the stability and performance of the cosmetic product. Lipids form a remarkable range of self-assembled nanostructures exhibiting very different architectures and properties to each other. Therefore, if the lipid phase behavior at a range of temperatures and water contents is known, it is possible to control the properties and performance of the cosmetic products during their processing, storage, transport and final applications. This review describes the types of lipid nanostructures, their derivatives with improved performance and possible ways to fine-tune their properties that can influence the development of cosmetic formulations.

Structure, properties and performance of lipid systems are closely linked, therefore it is possible to fine-tune the structure over a broad range and achieve desired properties and a suitable performance. For instance, the internal self-assembly of nanostructured emulsions can be altered from cubic Pn3m to cubic Im3m by adding diglycerol monooleate or pluronic F127 to a DU lipid system [111,112]. The size of lipid nanoparticles can be modulated by changing the concentration of the dispersed phase and/or the shear rate of the shearing device [94]. Nanoscale parameters can be moderated further by using a different emulsifying lipid; for instance, GMO and PT can be used for many applications where the DU is demonstrably used [60,73,113]. Addition of additives in varying proportions can induce structural changes; the additives can be an oil (tetradecane (TC), R(+)limonene (LM), etc.), glycerol, polysaccharides or other surfactants [50,112,114,115,116,117,118].
The temperature [119,120], the pressure [119], an effective charge [72,80,121] or the pH [122] can also cause structural transitions in the self-assembled nanostructures of lipid particles. The type of internal nanostructure is important because it can determine the possibility and efficiency of the encapsulation of functional molecules within the lipid system. Moreover, the release rates are strongly influenced by the type and lattice parameters of the nanostructure of lipid systems [53,60,74].
The rheological properties, especially the viscosity and the yield stress, are critical parameters while developing cosmetic products [123]. These properties differ largely among the self-assembled lipid nanostructures and their hierarchically organized derivatives as discussed below (Figure 6). Liposome solutions are usually very diluted and thus display water-like consistency. On the other hand, the viscosity (or storage modulus) of self-assembled bulk phases broadly increases from Lα phase to H2 phase to bicontinuous cubic phases [65,124], providing them viscous gel-like consistency (Figure 6). The dispersed system of nanostructured lipid particles (O/W emulsions) exhibits rather low viscosity (milk-like consistency) (Figure 6), which is actually one of the main motivations behind their preparation. Nonetheless, these O/W emulsions can be made viscous, if required, by various means, for instance, by increasing the concentration of the dispersed phase (usually a lipid phase) [94] or by preparing a hydrogel in the continuous phase of these emulsions [125,126] (Figure 6). The latter can be employed to partially arrest the dynamics of the nanostructured lipid particles [125]. This mixed system can be subsequently dehydrated to obtain dry films where the lipid particles are fully immobilized [127] (Figure 6). These thermos-reversible hydrogel systems can be rehydrated and re-dispersed on demand, which is highly useful for their storage, transport and potential biotechnological applications [128].
The W/O nanostructured emulsions exist in a range of consistencies including fluid, gel and cream, and also offer a great tunability in terms of their apparent viscosity [68,101]. Apparent viscosity (and yield stress) can be controlled by varying the dispersed phase content (φ), the proportion of the lipid phase (given in terms of δ value) and the concentration of hydrogelator (ε), as illustrated in Figure 7 [68]. Other parameters including temperature, type of nanostructure and type of lipid also influence the viscoelastic behavior of these nanostructured emulsions [68,101].

5. Nano-Hybrid Systems Based on Lipid Nanostructures

Recently, we have employed a very different approach to prepare O/W nanostructured emulsions. We developed these lipid-based systems by using a variety of carbon nanotubes (single-walled, hydroxyl-functionalized multi-walled and carboxyl-functionalized multi-walled) as stabilizers [81,82] (Figure 8). Another hybrid system was prepared from a different elegant carbon nanomaterial, fullerene (C60). The C60 was incorporated in the F127-stabilized O/W nanoparticle system [129] (Figure 8). Although these hybrid nano-systems might be considered non-biocompatible, they could be potential candidates for developing novel and innovative applications in future. The apparent reason is that the toxicity of pristine carbon nanomaterials is presumed to be greatly reduced by coating them with the lipid molecules, which are already biogenic materials. Similar efforts were also made by other researchers who managed to stabilize O/W nanostructured emulsions using silica nanoparticles [72] and laponite or montmorillonite clay platelets [80,130,131]. As mentioned earlier, we were also able to construct lipid-hydrogel hybrid systems and demonstrate their potential for loading and release of functional molecules in a sustained manner [128] (Figure 8).
These novel nanocomposite systems appear to be highly promising for future cosmetic applications as they could benefit from the special characteristics of both “lipid nanostructures” and the “other component, i.e., CNT, C60, silica nanoparticle, clay platelet or hydrogel”. It is thus possible to load them with more than one active ingredient, thereby opening new avenues in terms of simultaneous delivery of multiple molecules.

This report collectively describes a range of lipid-based systems including the basic self-assembly, hierarchically organized systems, novel food-based emulsion and nano-hybrid lipid systems. The review is not comprehensive but provides a different approach to the existing lipid-based materials and sheds light on their potential development into various cosmetic products by fine-tuning their properties at various levels. 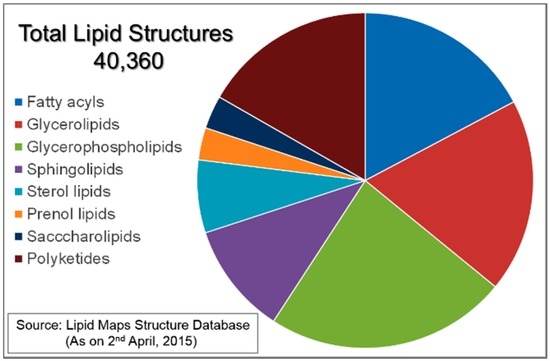 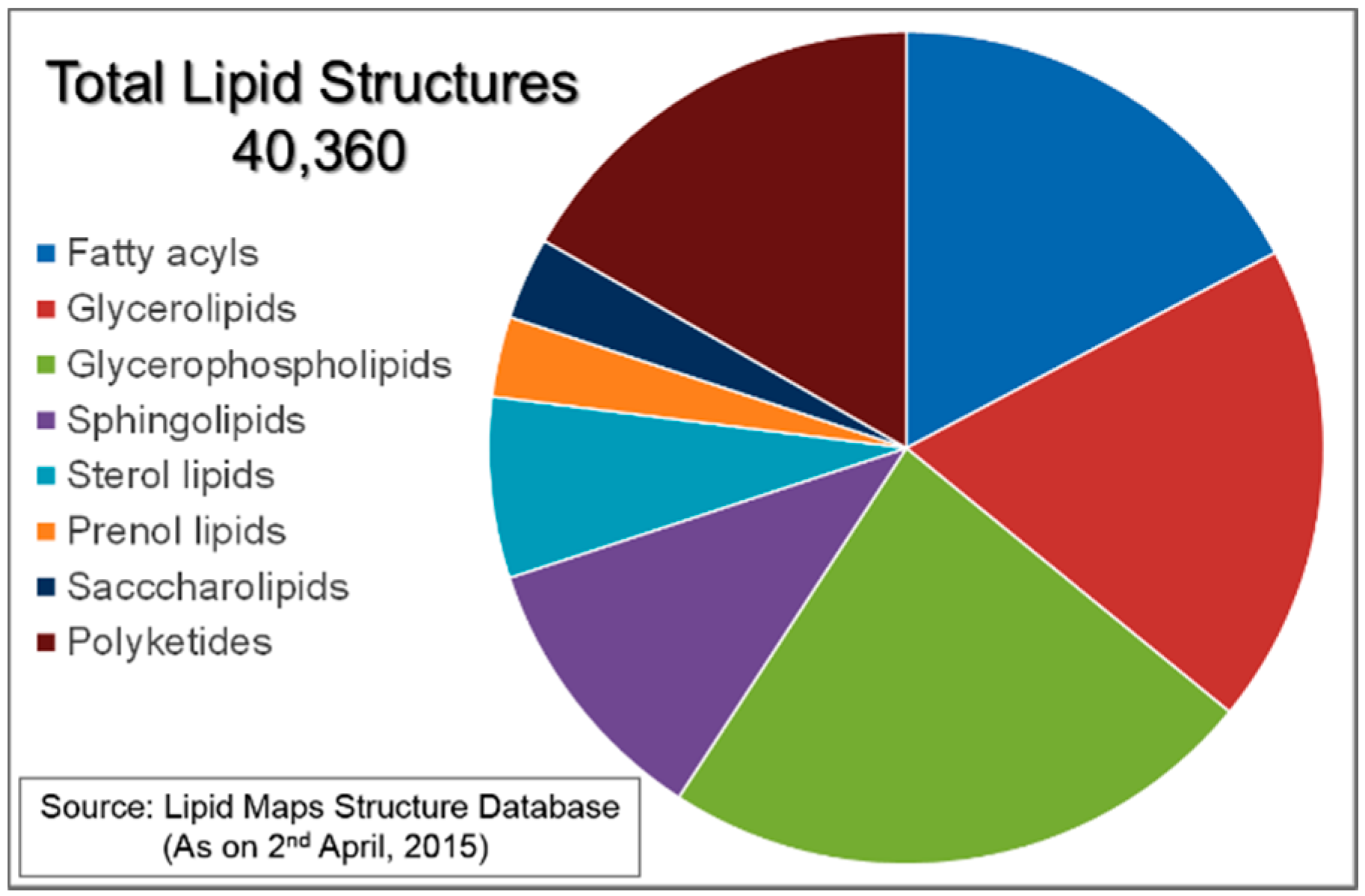 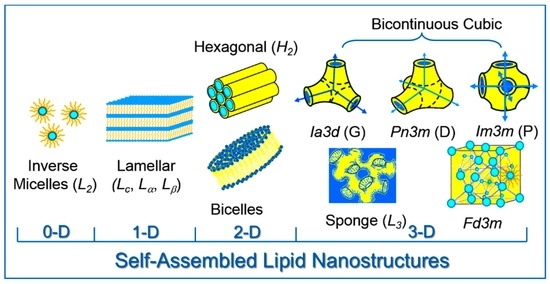 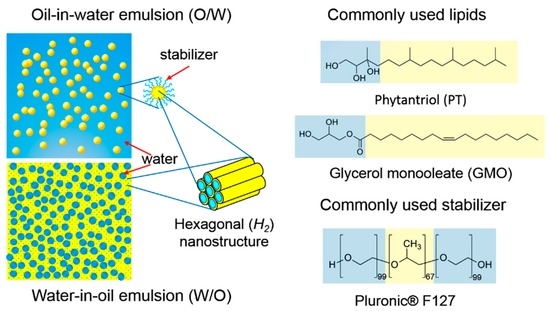 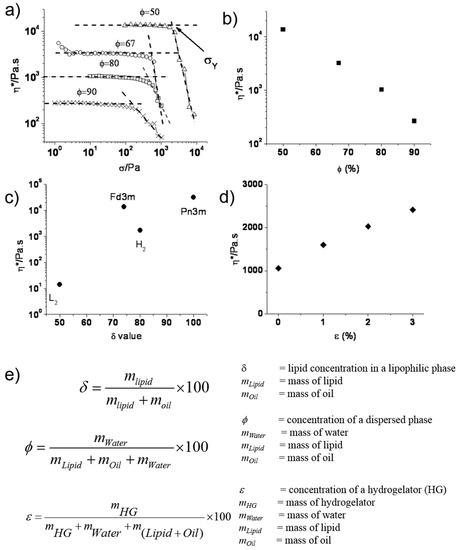 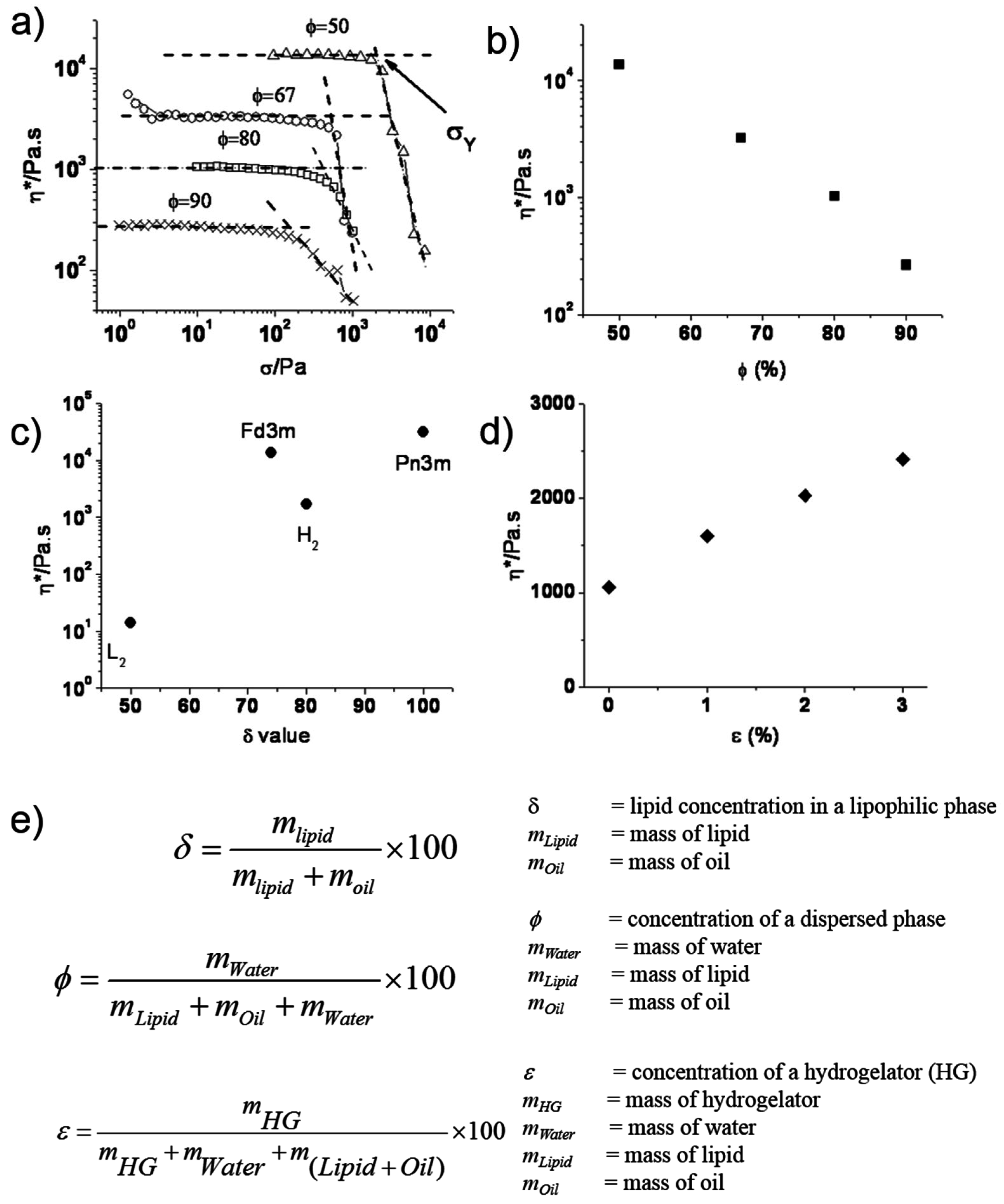