Considering the differences in approaches to stakeholder management, we presented an approach to stakeholder classification and management in CCS projects with the specification of stakeholder groups and creation of methods for their quantitative assessment. As directions for further research, we plan to specify the main stakeholder groups in CCS and CCUS projects (depending on the specifics and goals of the projects), their interests and contributions to the projects, as well as develop an approach to stakeholder assessment to get more reasonable results. At the same time, we plan to reveal the features of implementation of these projects in Russia, and, as a result, the peculiarities of stakeholder management in CCS projects in Russia.
In Russia, there are strongly pronounced specifics in possible implementation of CCS projects. The vast territories of the country permit the storage of CO2 at a considerable distance from industrial centers and residential areas that can potentially weaken stakeholder counteraction to the projects. A considerable impact on the CCS projects implementation in Russia is the extent of industrial development of the region and population density; for example, the Republic of Tatarstan and certain regions of Western Siberia that have depleted oil fields. The level of stakeholder influence and the number of stakeholder groups in such developed industrial regions will obviously be more than in the remote areas of Western Siberia. In this regard, the system of stakeholder management varies and this will be one of the directions for further relevant research.
CCS projects, when taken into isolation, are not generally commercially effective, as their successful implementation requires suitable partnerships, government support, and relevant legal framework. However, CCS technology is not only directed at obtaining ecological effects, but also at increasing energy efficiency and promoting social and economic development for the regions where the project is being implemented. It is possible to emphasize the five key advantages of CCS industrial projects:

(1)
Decrease in negative impact on the environment
(2)
Contribution to the socio-economic development of the regions and territories
(3)
Attractive direction for socially responsible investments
(4)
Assistance to sustainable development of the companies participating in the CCS projects
(5)
Usage of CO2 for purposes such as enhancing oil recovery by oil and gas enterprises, increase in energy efficiency of industrial enterprises, etc.

The last advantage represents an example of the circular business models that are of special interest in modern conditions. Switching from the current linear model of economy to a circular one has recently attracted increasing attention from many industries around the world, due to the huge financial, social, and environmental benefits associated with the latter [46].
One of the key issues in CCS project implementation lies in their perception by the public, as stakeholder groups can exert a strong influence on the project. Low levels of public awareness of CCS technology can cause a number of risks toward new projects.
The creation of a stakeholder management system is a crucial part of the initiation, planning, and implementation of CCS projects.
Prior to initiating these projects, a reasonable strategy for stakeholder management must be formulated, requiring the identification and careful analysis of key stakeholders at the earliest stages of the project. In this paper, it was proven that the circle of stakeholders in CCS projects is rather wide, and their interests can clash.

The research was carried out with the financial support of a grant by the Russian Science Foundation (Project No. 18-18-00210, “Development of assessment methodology of public efficiency of projects devoted to carbon dioxide sequestration”). 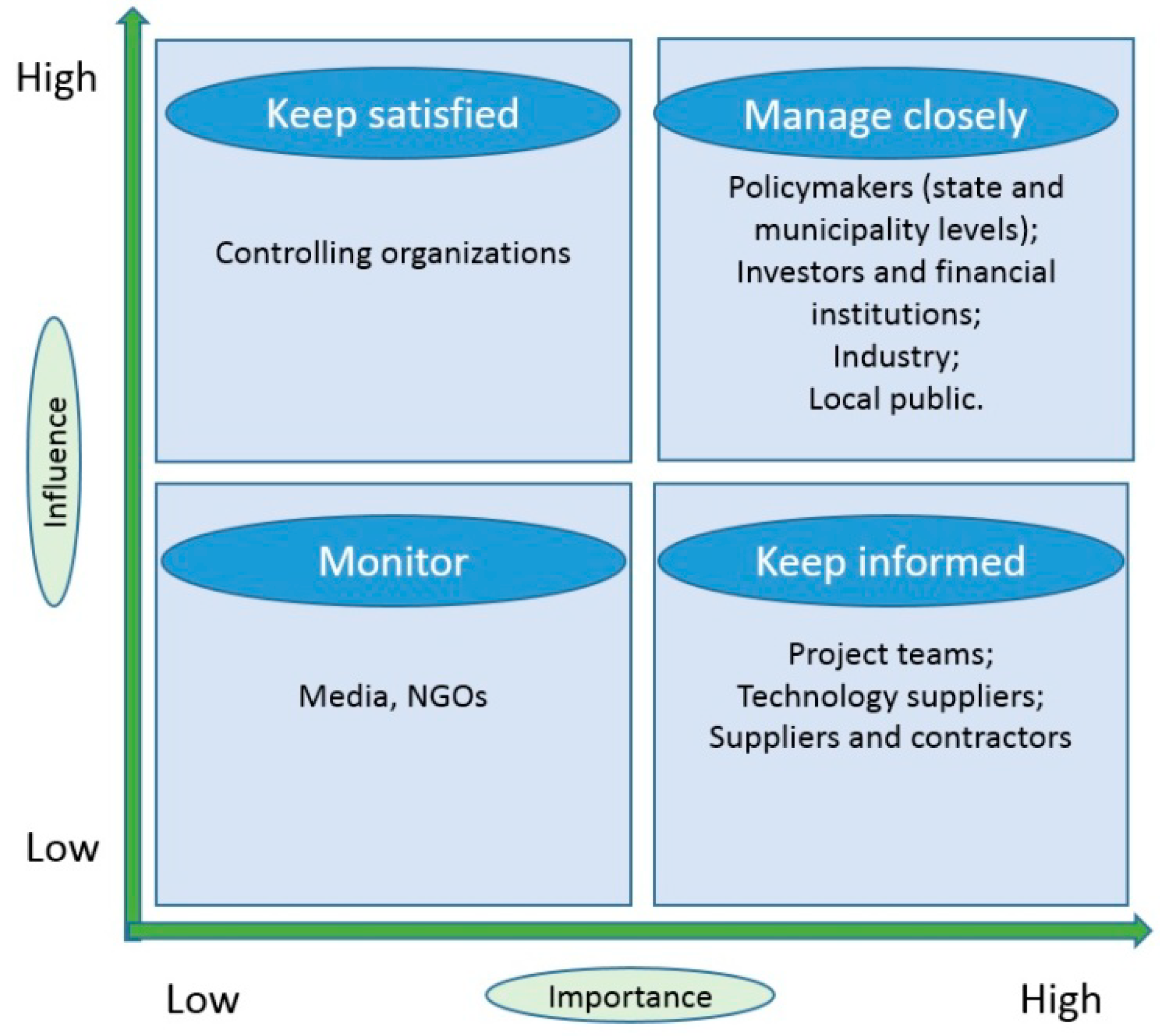