The Takakura technique converts food waste into compost. This project explored the potential use of composting in offices and workplaces. The method involves using small boxes containing a fermentation substrate where food waste is added. Two Takakura composting boxes (TCBs) were placed in the kitchens of the Chemistry Department and the Environmental Engineering buildings at the Instituto Tecnológico de Costa Rica, Costa Rica. Food waste from both buildings, comprising the food waste of 45 staff members, were composted from June to December 2015. All types of food, except grease, oil, raw meat, and bones, were processed. The mass and volume of food added to the boxes were quantified daily. A chemical analysis of the compost was also performed. A speech was given to educate the staff members about the system. A survey, before and after the speech, was developed to evaluate the knowledge and tolerance towards composting in closed spaces. A total mass of 88.29 kg, equivalent to 232 L of residues, was processed, from which 17.37 kg (37 L) of compost was obtained. This represented a mass and volume reduction of 80% and 84%, respectively. Compost analysis gave a C/N ratio of 14.7/1, indicative of maturity. Most of the staff members (92%) agreed to the separation of waste at the source. However, 37% suggested allocating the box outside the building. The survey, after the speech, showed that educating staff is necessary before installing boxes at a workplace. View Full-Text
Keywords: Takakura method; home composting; food waste; offices; workplaces Takakura method; home composting; food waste; offices; workplaces
►▼ Show Figures 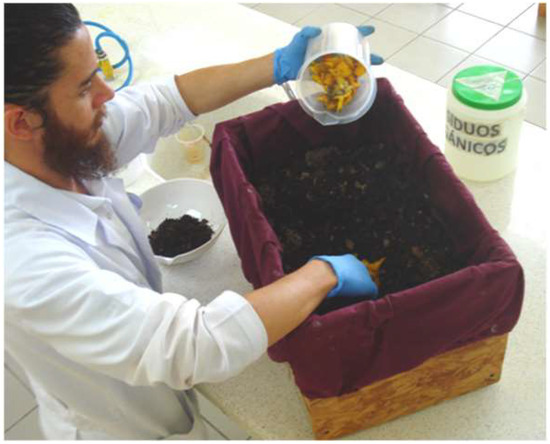