Prostate cancer (PCa) is one of the most common cancers among men, and one of the leading causes of cancer death for men. The c-Jun N-terminal kinase (JNK) pathway is required for several cellular functions, such as survival, proliferation, differentiation, and migration. Wnt-11, a member of the Wnt family, has been identified for its upregulation in PCa; however, downstream signalling of Wnt-11 remains to be fully characterized. In this study, we investigated the role of the JNK pathway as a potential downstream factor for Wnt-11 signalling. For this purpose, LNCaP, DU145, and PC-3 PCa cells and normal epithelial PNT1A cells were treated with a specific JNK kinase inhibitor: JNKVIII. Our results showed that JNK inhibition decreased mitochondrial membrane potential and promoted cell death in a cell type-dependent manner. We found that JNK inhibition led to an increase in autophagy and prevented epithelial–mesenchymal transition (EMT) in independently growing androgen cells. JNK inhibition and the silencing of Wnt-11 showed similar responses in DU145 and PC-3 cells and decreased metastasis-related biomarkers, cell migration, and invasion. Overall, our results suggest that JNK signalling plays a significant role in the pathophysiology of PCa by mediating Wnt-11 induced signals. Our data highlights that both the JNK pathway and Wnt-11 could be a useful therapeutic target for the combinatory application of current PCa. View Full-Text
Keywords: c-Jun signalling; prostate cancer; apoptosis; Wnt-11; neuroendocrine-like differentiation c-Jun signalling; prostate cancer; apoptosis; Wnt-11; neuroendocrine-like differentiation
►▼ Show Figures 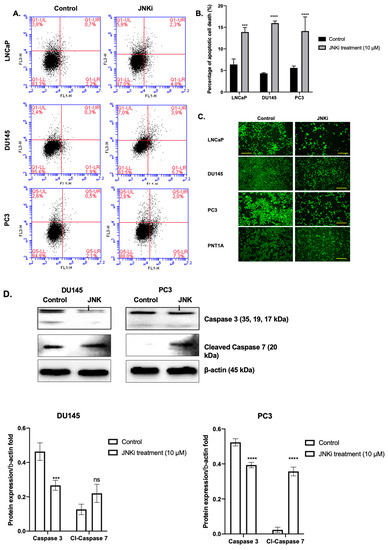