Prostaglandin E2 and Cancer: Insight into Tumor Progression and Immunity

Equine genital squamous cell carcinomas (egSCCs) associated with papilloma virus (PV) infection have been recently proposed as model for human PV-induced SCC. In both species, PV mucosal infections often induce cervical, oropharyngeal, penile, anal, vaginal, and vulvar cancer. The aim of this study was to clarify the molecular mechanisms behind egSCCs associated with equine papillomavirus 2 (EcPV2) infection investigating receptor activator of nuclear factor-kappa B ligand (RANKL), Wnt, and interleukin (IL)17 signaling pathways. RANKL has been recently demonstrated to play a crucial role in several human tumors, associated with a poor prognosis and metastatic spread; novel targeted therapies through RANKL silencing monoclonal antibodies have been undertaken. EcPV2-E6 DNA was checked, and viral presence was confirmed in 91% of cases, whereas oncogene expression was 60.8% for E6 and 34.7% for E2. RANKL, NFKBp50, NFKBp65, IL6, IL17, IL23p19, IL8, IL12p35, IL12p40, BCATN1, FOSL1, and LEF1 gene expression showed a significant upregulation in tumor samples compared to healthy tissues. Our results describe an inflammatory environment characterized by the increased expression of several cytokines and the activation of RANKL/RANK, IL17A, and canonical and non-canonical Wnt signaling pathways. These results may be helpful to identify new targets for immunotherapy strategies confirming egSCCs as a model for the human disease.

Equine genital squamous cell carcinomas (egSCCs) are among the most common equine tumors after sarcoids, severely impairing animal health and welfare. Equus caballus papillomavirus type 2 (EcPV2) infection is often related to these tumors. The aim of this study was to clarify the molecular mechanisms behind egSCCs associated with EcPV2 infection, investigating receptor activator of nuclear factor-kappa B ligand (RANKL) signaling in NF-kB pathway, together with the Wnt and IL17 signaling pathways. We analyzed the innate immune response through gene expression evaluation of key cytokines and transcription factors. Moreover, Ki67 index was assessed with immunohistochemistry. EcPV2-E6 DNA was checked, and viral presence was confirmed in 21 positive out to 23 cases (91%). Oncogene expression was confirmed in 14 cases (60.8%) for E6 and in 8 (34.7%) for E2. RANKL, nuclear factor kappa-light-chain-enhancer of activated B cells (NFKB)-p50, NFKBp65, interleukin (IL)-6, IL17, IL23p19, IL8, IL12p35, IL12p40, β-catenin (BCATN1), FOS like 1 (FOSL1), and lymphoid enhancer binding factor 1 (LEF1) showed a significant upregulation in tumor samples compared to healthy tissues. Our results describe an inflammatory environment characterized by the activation of RANKL/RANK and IL17 with the relative downstream pathways, and a positive modulation of inflammatory cytokines genes such as IL6 and IL8. Moreover, the increase of BCATN1, FOSL1, and LEF1 gene expression suggests an activation of both canonical and non-canonical Wnt signaling pathway that could be critical for carcinogenesis and tumor progression. View Full-Text
Keywords: Wnt pathway; RANKL pathway; inflammation; IL17A; equine; EcPV2; E6 expression; IL23; IL12 Wnt pathway; RANKL pathway; inflammation; IL17A; equine; EcPV2; E6 expression; IL23; IL12
►▼ Show Figures 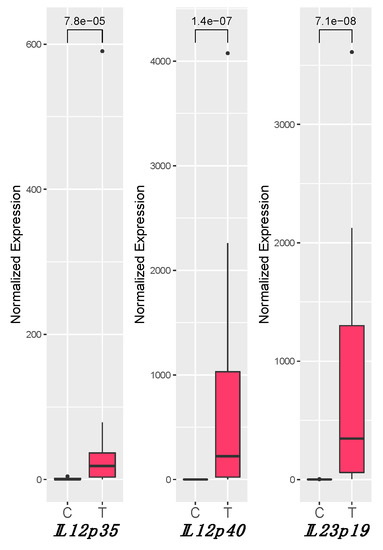