Bacterial Nanocellulose and Its Surface Modification by Glycidyl Methacrylate and Ethylene Glycol Dimethacrylate. Incorporation of Vancomycin and Ciprofloxacin

Many studies show how biomaterial properties like stiffness, mechanical stimulation and surface topography can influence cellular functions and direct stem cell differentiation. In this work, two different natural materials, gelatin (Gel) and cellulose nanofibrils (CNFs), were combined to design suitable 3D porous biocomposites for soft-tissue engineering. Gel was selected for its well-assessed high biomimicry that it shares with collagen, from which it derives, while the CNFs were chosen as structural reinforcement because of their exceptional mechanical properties and biocompatibility. Three different compositions of Gel and CNFs, i.e., with weight ratios of 75:25, 50:50 and 25:75, were studied. The biocomposites were morphologically characterized and their total- and macro- porosity assessed, proving their suitability for cell colonization. In general, the pores were larger and more isotropic in the biocomposites compared to the pure materials. The influence of freeze-casting and dehydrothermal treatment (DHT) on mechanical properties, the absorption ability and the shape retention were evaluated. Higher content of CNFs gave higher swelling, and this was attributed to the pore structure. Cross-linking between CNFs and Gel using DHT was confirmed. The Young’s modulus increased significantly by adding the CNFs to Gel with a linear relationship with respect to the CNF amounts. Finally, the biocomposites were characterized in vitro by testing cell colonization and growth through a quantitative cell viability analysis performed by 3-(4,5-dimethylthiazol-2-yl)-2,5-diphenyltetrazolium bromide (MTT) assay. Additionally, the cell viability analysis was performed by the means of a Live/Dead test with Human mesenchymal stem cells (hMSCs). All the biocomposites had higher cytocompatibility compared to the pure materials, Gel and CNFs. View Full-Text
Keywords: soft-tissue; polymer blends; nanocellulose; gelatin; cell-tissue interaction soft-tissue; polymer blends; nanocellulose; gelatin; cell-tissue interaction
►▼ Show Figures 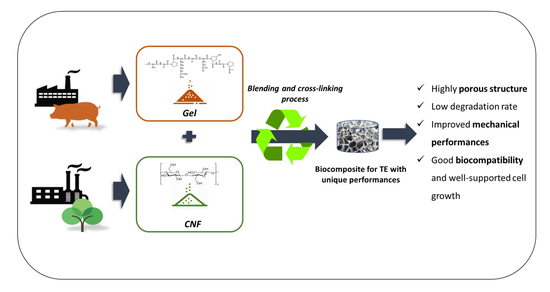