The supply of freshwater has become a worldwide interest, due to serious water shortages in many countries. Due to rapid increases in the population, poor water management, and limitations of freshwater resources, Egypt is currently below the water scarcity limit. Since Egypt has approximately 3000 km of coastlines on both the Red Sea and the Mediterranean Sea, seawater desalination powered by marine renewable energy could be a sustainable alternative solution, especially for remote coastal cities which are located far from the national water grid. The objective of this research work is to evaluate the feasibility of a floating desalination plant (FDP) concept powered by marine renewable energy for Egypt. A novel design of the FDP concept is developed as an innovative solution to overcome the freshwater shortage of remote coastal cities in Egypt. A mobile floating platform supported by reverse osmosis (RO) membrane powered by marine renewable power technology is proposed. Based on the abundant solar irradiation and sufficient wind density, Ras Ghareb was selected to be the base site location for the proposed FDP concept. According to the collected data from the selected location, a hybrid solar–wind system was designed to power the FDP concept under a maximum power load condition. A numerical tool, the DNV-GL Sesam software package, was used for static stability, hydrodynamic performance, and dynamic response evaluation. Moreover, WAVE software was used to design and simulate the operation of the RO desalination system and calculate the power consumption for the proposed FDP concept. The results show that the proposed mobile FDP concept is highly suitable for being implemented in remote coastal areas in Egypt, without the need for infrastructure or connection to the national grid for both water and power. View Full-Text
Keywords: desalination; floating desalination plant; hybrid renewable energy systems; marine renewable energy; offshore marine platform desalination; floating desalination plant; hybrid renewable energy systems; marine renewable energy; offshore marine platform
►▼ Show Figures 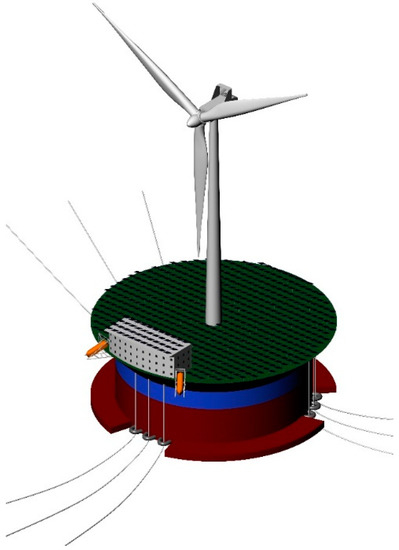