Partial Stator Overlap in a Linear Generator for Wave Power: An Experimental Study

Sound backscattered to a sonar from a seabed decreases in intensity with increasing range () due to geometrical spreading. As a far-range approximation, a geometrical spreading correction of decibels may be applied. A correction based on an accurate estimation of the area of the seabed ensonified by the sonar pulse incorporates additional terms that are a function of: range, sonic ray inclination angle, along- and across-trace components of seabed slope and sonar vehicle pitch. At near-normal incidence, the area of the seabed ensonified by the pulse lies within a circle truncated by the narrowness of the sonar beam. Beyond a critical range, the ensonified area separates into two areas disposed on opposite sides of an annulus, one being the principal and the other its conjugate. With increasing range, backscatter intensity from the conjugate area rapidly decreases. At steep inclination angles, the principal area of seabed ensonified is effectively increased by an estimable factor due to scattering from the conjugate area. Backscatter from the conjugate area leads the angle of incidence measured by swath interferometry requiring a correction for an estimate of the angle to the center of the pulse in the principal area. View Full-Text
Keywords: sidescan sonar; geometrical spreading; sonar data processing sidescan sonar; geometrical spreading; sonar data processing
►▼ Show Figures 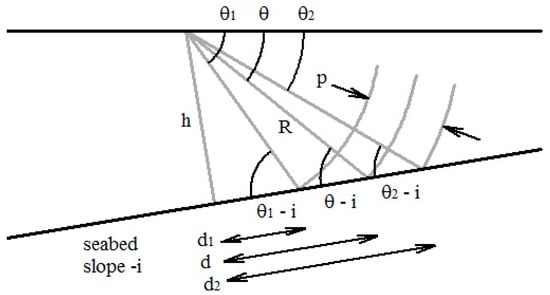