Impacts of LEDs in the Red Spectrum on the Germination, Early Seedling Growth and Antioxidant Metabolism of Pea (Pisum sativum L.) and Melon (Cucumis melo L.)
Previous Article in Journal

The identification of heterotic groups may provide an important advantage for hybrid eggplant (Solanum melongena) breeding. In this study, we evaluated the combining ability and heterotic patterns of eggplant lines in order to develop improved eggplant cultivars resistant to Fusarium oxysporum f. sp. melongenae (FOM). A set of 62 inbred lines was evaluated with 32 morphological descriptors and their relationships were analyzed through a multivariate cluster analysis. A subset of 39 inbred lines was selected and, together with 15 sister lines, they were crossed with two testers to investigate their general combining ability (GCA) and to establish heterotic groups. Twenty selected inbred lines with high GCA were intercrossed using a half-diallel mating design. Eighty-two hybrids were obtained and evaluated for yield and yield components. We found no association between morphological distance and membership to specific heterotic groups. However, heterosis for yield was found in hybrids among parents from different heterotic groups or that were included in all heterotic groups. Among the hybrids evaluated, some were found to be highly productive and resistant to FOM, being candidates for the registration of new cultivars with dramatically improved characteristics. View Full-Text
Keywords: breeding; half-diallel; heterosis; hybrids; Solanum melongena breeding; half-diallel; heterosis; hybrids; Solanum melongena
►▼ Show Figures 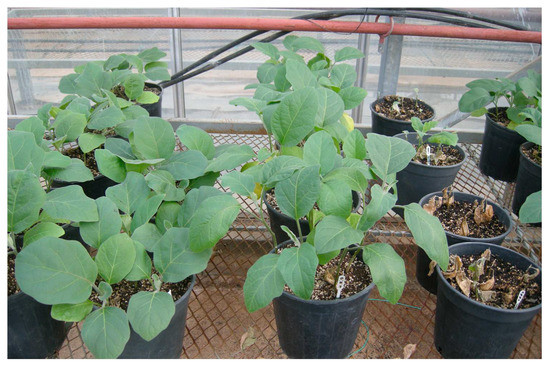