Background: The identification of C-repeat binding factor (CBF), and the characterization as an inducer of CBF Expression 1 (ICE1), and a major activator for C-repeat binding factor, were important breakthroughs in the cold signaling network. Methods: In the present study, the full length cDNA of ICE1 was isolated from the tea tree (Camellia sinensis). CsICE1 protein was located in the cell nucleus as revealed by subcellular localization analysis. To investigate the biological functions of CsICE1, a transgenic line fused with the CsICE1 gene in Arabidopsis thaliana (arabidopsis) was generated by the floral dip method. Results: The CsICE1 was expressed differentially in various tea tree tissues, mostly in buds and leaves, and the transcript level of CsICE1 was increased after 1 h and peaked at 2 h under cold treatment. Transcription activity assay indicated that the spermine synthase (SPMS) and arginine decarboxylase (ADC) genes were possible targets of CsICE1. In addition, the values of net photosynthetic rate, transpiration rate, stomatal conductance in transgenic lines declined by less extent than wild-type plants under low temperatures. Furthermore, transcript levels of ADC genes in the transgenic lines had no apparent alteration under normal growth conditions but substantially increased under cold conditions, consistent of changes in free polyamine levels. Taken together, these results demonstrated that CsICE1 plays a positive role in cold tolerance, which may be due to the modulation of polyamine levels through interacting with CsADC. View Full-Text
Keywords: biological function; Camellia sinensis; expression analysis; gene cloning; transgenic plant; arginine decarboxylase biological function; Camellia sinensis; expression analysis; gene cloning; transgenic plant; arginine decarboxylase
►▼ Show Figures 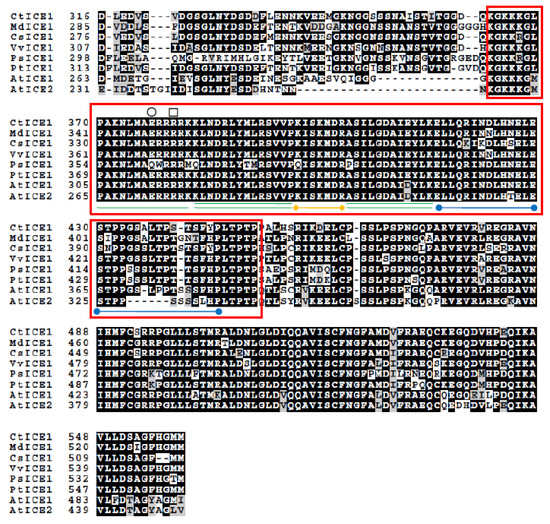