Ultrafiltration (UF) membranes have attracted the increasing interests of scientists during the last decades. In the meantime, they are common in several applications as waste-water treatment [1,2,3], biomolecule separation [1,4], and controlled drug release [5]. UF membranes can be made from organic and inorganic materials by different techniques suitable for the material nature including casting, phase inversion, track-etching, anodizing, sintering, and film-stretching as conventional examples. Since each membrane is limited in their separation performance [6,7,8], new methods for the formation of UF membranes, especially of isoporous membranes [9], will be still present on the agenda of membrane scientists.
For many years the only type of commercially available isoporous membranes was track-etched membranes. One success story to implement other methods to fabricate isoporous membranes starting ten years ago is the combination of self-assembly of amphiphilic block copolymers (S), and the non-solvent induced phase separation process (NIPS) called SNIPS [10]. With this method, UF membranes from various block copolymers can be prepared in a fast one-step process, leading to a new type of integral-asymmetric membrane with highly ordered, hexagonally arranged pores on the surface [11,12,13,14]. During the last few years, significant advances towards mass production of isoporous structures based on amphiphilic polymers has been achieved [15,16,17]. Nevertheless, the characterization of such membranes will cause problems if swellable polymer blocks are implemented and a standard solvent, e.g., water, will be used. In consequence, flux decline can occur as shown in Figure 1 [11,18,19,20,21].
Other problems for the characterization of UF membranes using water as liquid include fouling [22,23,24] and the unstable flow at different pressures [20]. The quality of water also plays an important role since deionized water made with different techniques, general tap water, or UV-treated water are used in different laboratories, dependent on the application and available facilities. The water flux values for UF membranes given in the literature are measured so far with several techniques, involving different: Pressures, time to stabilize the system until the value is measured, temperature, pre-treatment of the membranes in case of hydrophobic material, and so on.
In order to solve the aforementioned problems, one important question arises: How can we characterize UF membranes and get comparable data independent of the membranes’ chemical composition? The probing liquid which is inert for as many membrane materials as possible is needed, as well as an easy to implement method of the membranes permeance measurement. From the variety of liquid compounds available on the market, perfluorinated (PF) compounds were found to be the most promising. PF compounds are known for their very limited interaction/affinity with/to substances not containing fluorine, offering low surface tension, high density, and the wide variation in dynamic viscosity. In this work, PF compounds were chosen as a test media for the characterization of UF membranes of various nature. The PF compounds were chosen to cover as big a range of viscosity as possible, and included linear, cyclic and aromatic compounds. As examples of commercial membranes, ceramic anodic alumina, polymeric track-etched, and standard ultrafiltration membranes with isotropic and anisotropic morphology were chosen.
The results of our experiments confirm that porous membranes of almost any nature can be tested using PF liquids, and membrane properties can be compared. The membranes do not swell during the experiments and are not altered by PF compounds.

In this work, we want to justify the method suitable for standard membrane characterization with examples of membranes of different nature, cross-sectional morphology, and membrane preparation method: Polymeric membranes prepared from homopolymers by the phase inversion process and resulting in a broad pore size distribution, two mostly isoporous membranes: Polymeric track-etched and inorganic anodic alumina and highly isoporous membrane prepared from amphiphilic diblock copolymer manufactured by SNIPS. The PF compounds used for the membrane characterization have a carbon backbone of different arrangements, which allows for investigating the dependence of the fluid flow through the pores on the shape of the fluid molecule.
The first section will be dedicated to the verification of the method of permeance measurements with a water sensitive membrane and PF hexane. Later, we apply the method for the characterization of different membranes with various PF compounds.

2.1. Verification of the Experimental Method for Sensitive Membranes

Since block copolymer membranes (BCPM) are the most sensitive of all membranes under investigation in this work, BCPM will be used to verify the method by using PF hexane for flux measurements. We chose one of the most common in-house made isoporous block copolymer membrane system, membranes made from polystyrene-b-poly(4-vinylpyridine) (PS-b-P4VP) with 4-vinylpyridine as a water swellable block.
Figure 2 depicts the permeance of PF hexane for a BCPM made from PS82.8-b-P4VP17.2190k diblock copolymer. One membrane stamp was measured three times in a row using the same PF hexane in order to evaluate the stability of the permeance which was found to be similar for all three measurements. Only a small deviation of less than 2% was found coming from the accuracy of the measurement collecting the data each second. Compared to water flux measurements, where big flux declines can be found at the beginning of the measurements (compare to Figure 1), this is an improvement for the characterization of performances of BCPM made from copolymers containing water swellable blocks. Deviation of the permeances at the beginning of the measurement may occur due to the wetting of the membrane and the instability of the pressure when the device is set on.
For the purpose of examining the stability of permeances depending on the transmembrane pressure, measurements were carried out at different pressures between 0.5 and 2 bar, i.e., within the design pressure range of the flux measurement facility. Figure 3 depicts the flux of three different PF compounds through the BCPM examined for the permeance stability (Figure 2) as a function of a trans-membrane pressure. For three PF compounds chosen to cover the full range of dynamic viscosity the permeance increases linearly, with the pressure indicating that in the selected pressure range any pressure suitable for the measurement can be chosen in dependence on the liquid viscosity.

3.1. Membranes Used in This Work

3.2. Perfluorinated Compounds Used in This Work and Their Physical Data

Liquid permeance measurements were performed in a simple dead-end mode at room temperature using an in-house designed and manufactured testing facility, as schematically shown in Figure 8. A Millipore inline stainless steel filter with 20 mm sample diameter was used as a membrane sample holder. Nitrogen at relative pressures from 0.5 to 2.5 bar was used to create a driving force. The liquid flow rate through the membrane was measured gravimetrically every second by weight acquisition from the Mettler Toledo NewClassic MF MS1003S precision balance with 0.001 g accuracy. In our case, all data including pressure, temperature, and weight was transmitted to a computer for an easy evaluation.
The permeance (P) was calculated by normalizing the flux by the trans-membrane pressure (See Equation (4)): where ΔV is the volume of PF compound collected between two mass measurements, A is the membrane surface area, Δt is the time between two mass measurements, and Δp is the trans-membrane pressure.
The flux (J) through the membrane was calculated according to the Equation (5):
The trans-membrane pressure was varied in the range 0.5 to 2.5 bar depending on the PF liquid viscosity in order to ensure the collection of the experimental data during similar time intervals for all liquids. The independence of the flux on the trans-membrane pressure was studied and will be described further.

In this work we examined the use of PF compounds as possible universal media for the characterization of ultrafiltration membranes in order to avoid e.g., swelling of membranes in water, as discussed before [11,20]. Therefore, PF compounds of different molecular shape and electronic nature were studied. The following results were observed: 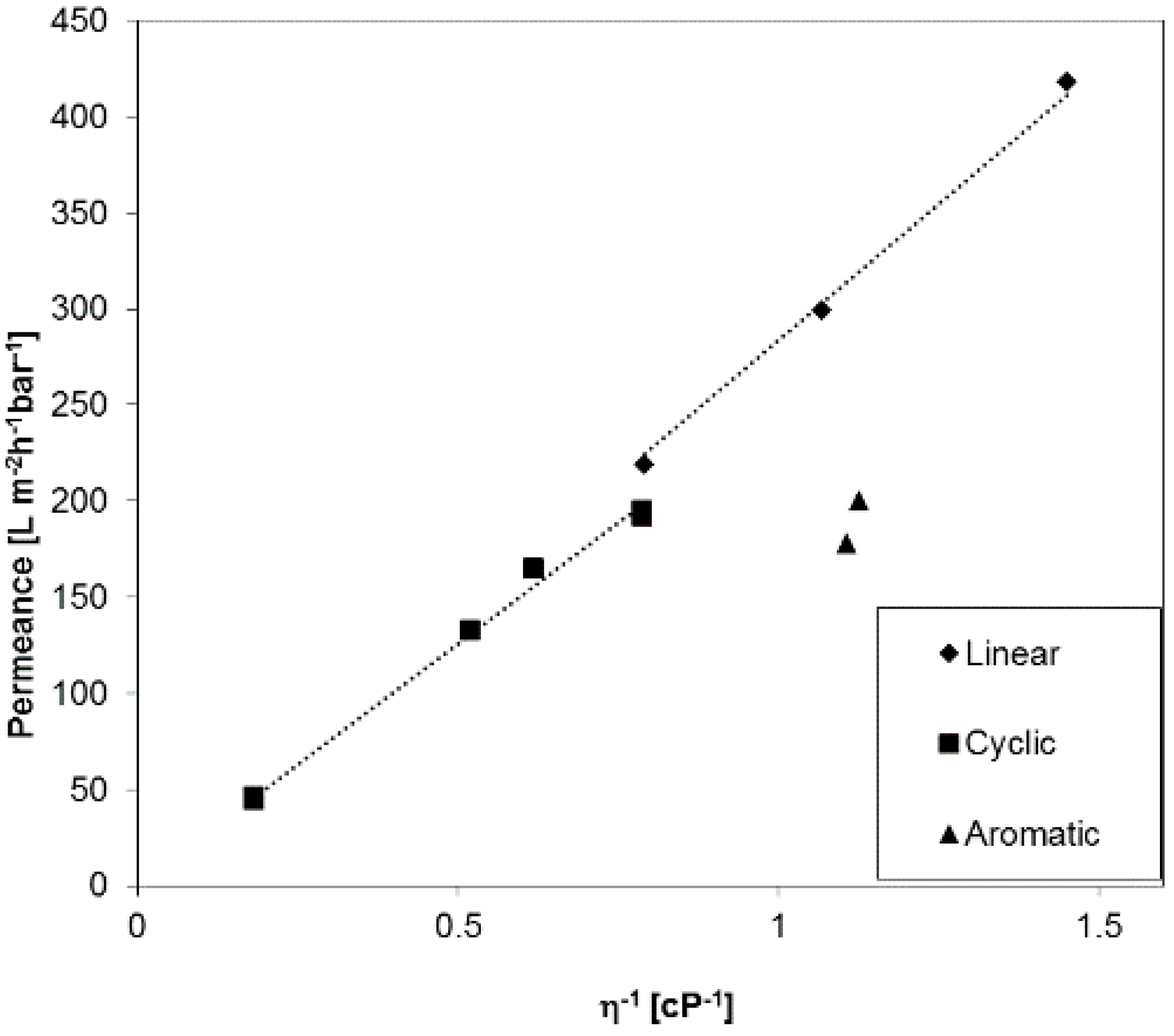 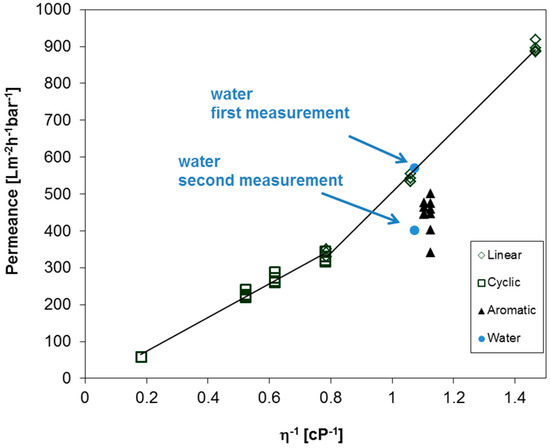 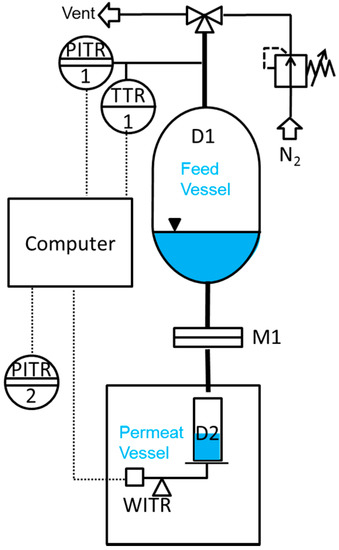