Human Skin Lightening Efficacy of Resveratrol and Its Analogs: From in Vitro Studies to Cosmetic Applications
Previous Article in Journal

p-Coumaric Acid as An Active Ingredient in Cosmetics: A Review Focusing on its Antimelanogenic Effects

Controlling unwanted hyperpigmentation is a major challenge in dermatology and cosmetology, and safe and efficacious antimelanogenic agents are deemed useful for this purpose. p-Coumaric acid is a natural metabolite contained in many edible plants, and its antioxidant activities in reducing oxidative stress and inflammatory reactions have been demonstrated in various experimental models. p-Coumaric acid has the optimal structure to be a competitive inhibitor of tyrosinase that catalyzes key reactions in the melanin biosynthetic pathway. Experimental evidence supports this notion as it was found to be a more potent inhibitor of tyrosinase, especially toward human enzymes, than other well-known tyrosinase inhibitors such as arbutin and kojic acid. p-Coumaric acid inhibited melanin synthesis in murine melanoma cells, human epidermal melanocytes, and reconstituted three-dimensional human skin models. Ex-vivo skin permeation experiments and in-vivo efficacy tests for p-coumaric acid confirmed its efficient transdermal delivery and functional efficacy in reducing erythema development and skin pigmentation due to ultraviolet radiation exposure. Human studies further supported its effectiveness in hypopigmentation and depigmentation. These findings suggest that p-coumaric acid has good potential to be used as a skin-lightening active ingredient in cosmetics. Future studies are needed to extensively examine its safety and efficacy and to develop an optimized cosmetic formulation for the best performance in skin lightening. View Full-Text
Keywords: p-coumaric acid; 4-hydroxycinnamic acid; cosmetics; skin; melanin; pigmentation; oxidative stress; inflammation; UV; phytochemical; antioxidant p-coumaric acid; 4-hydroxycinnamic acid; cosmetics; skin; melanin; pigmentation; oxidative stress; inflammation; UV; phytochemical; antioxidant
►▼ Show Figures 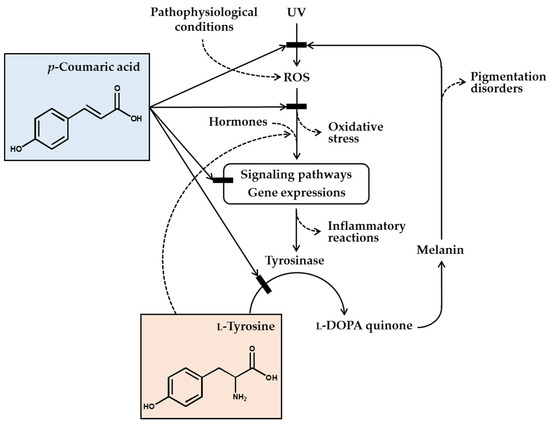