Plants of the genus Monochoria have long been utilized in food, cosmetics, and traditional herbal treatments. Thailand has the highest species diversity of this genus and a new member, Monochoria angustifolia (G. X. Wang) Boonkerd & Tungmunnithum has been recently described. This plant is called “Siam Violet Pearl” as a common name or “Khimuk Si Muang Haeng Siam” as its vernacular name with the same meaning in the Thai language. Despite their importance, little research on Monochoria species has been conducted. This study, thus, provides the results to fill in this gap by: (i) determining flavonoid phytochemical profiles of 25 natural populations of M. angustifolia covering the whole floristic regions in Thailand, and (ii) determining antioxidant activity using various antioxidant assays to investigate probable mechanisms. The results revealed that M. angustifolia presents a higher flavonoid content than the outgroup, M. hastata. Our results also revealed that flavonoids might be used to investigate Monochoria evolutionary connections and for botanical authentication. The various antioxidant assays revealed that M. angustifolia extracts preferentially act through a hydrogen atom transfer antioxidant mechanism. Pearson correlation analysis indicated significant correlations, emphasizing that the antioxidant capacity is most probably due to the complex action of several phytochemicals rather than that of a single molecule. Together, these results showed that this new species provide an attractive alternative starting material with phytochemical variety and antioxidant potential for the phytopharmaceutical industry. View Full-Text
Keywords: Monochoria angustifolia; Monochoria hastata; flavonoid; antioxidant mechanism; natural populations; phytochemical profile; traditional herbal medicine; phytopharmaceutical application Monochoria angustifolia; Monochoria hastata; flavonoid; antioxidant mechanism; natural populations; phytochemical profile; traditional herbal medicine; phytopharmaceutical application
►▼ Show Figures 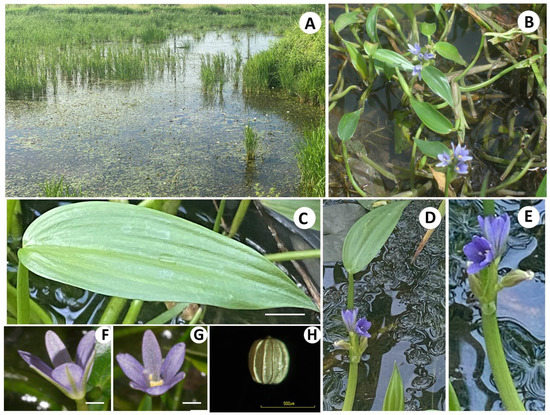