t-Test at the Probe Level: An Alternative Method to Identify Statistically Significant Genes for Microarray Data

Our group has been systematically investigating the effects of the neuropeptide pituitary adenylate-cyclase activating polypeptide (PACAP) on the ischemic brain. To do so, we have established and utilized the permanent middle cerebral artery occlusion (PMCAO) mouse model, in which PACAP38 (1 pmol) injection is given intracerebroventrically and compared to a control saline (0.9% sodium chloride, NaCl) injection, to unravel genome‑wide gene expression changes using a high-throughput DNA microarray analysis approach. In our previous studies, we have accumulated a large volume of data (gene inventory) from the whole brain (ipsilateral and contralateral hemispheres) after both PMCAO and post-PACAP38 injection. In our latest research, we have targeted specifically infarct or ischemic core (hereafter abbreviated IC) and penumbra (hereafter abbreviated P) post-PACAP38 injections in order to re-examine the transcriptome at 6 and 24 h post injection. The current study aims to delineate the specificity of expression and localization of differentially expressed molecular factors influenced by PACAP38 in the IC and P regions. Utilizing the mouse 4 × 44 K whole genome DNA chip we show numerous changes (≧/≦ 1.5/0.75-fold) at both 6 h (654 and 456, and 522 and 449 up- and down-regulated genes for IC and P, respectively) and 24 h (2568 and 2684, and 1947 and 1592 up- and down-regulated genes for IC and P, respectively) after PACAP38 treatment. Among the gene inventories obtained here, two genes, brain-derived neurotrophic factor (Bdnf) and transthyretin (Ttr) were found to be induced by PACAP38 treatment, which we had not been able to identify previously using the whole hemisphere transcriptome analysis. Using bioinformatics analysis by pathway- or specific-disease-state focused gene classifications and Ingenuity Pathway Analysis (IPA) the differentially expressed genes are functionally classified and discussed. Among these, we specifically discuss some novel and previously identified genes, such as alpha hemoglobin stabilizing protein (Ahsp), cathelicidin antimicrobial peptide (Camp), chemokines, interferon beta 1 (Ifnb1), and interleukin 6 (Il6) in context of PACAP38-mediated neuroprotection in the ischemic brain. Taken together, the DNA microarray analysis provides not only a great resource for further study, but also reinforces the importance of region-specific analyses in genome-wide identification of target molecular factors that might play a role in the neuroprotective function of PACAP38. View Full-Text
Keywords: ischemic core; penumbra; PACAP38; differential gene expression; Ahsp; Ttr ischemic core; penumbra; PACAP38; differential gene expression; Ahsp; Ttr
►▼ Show Figures 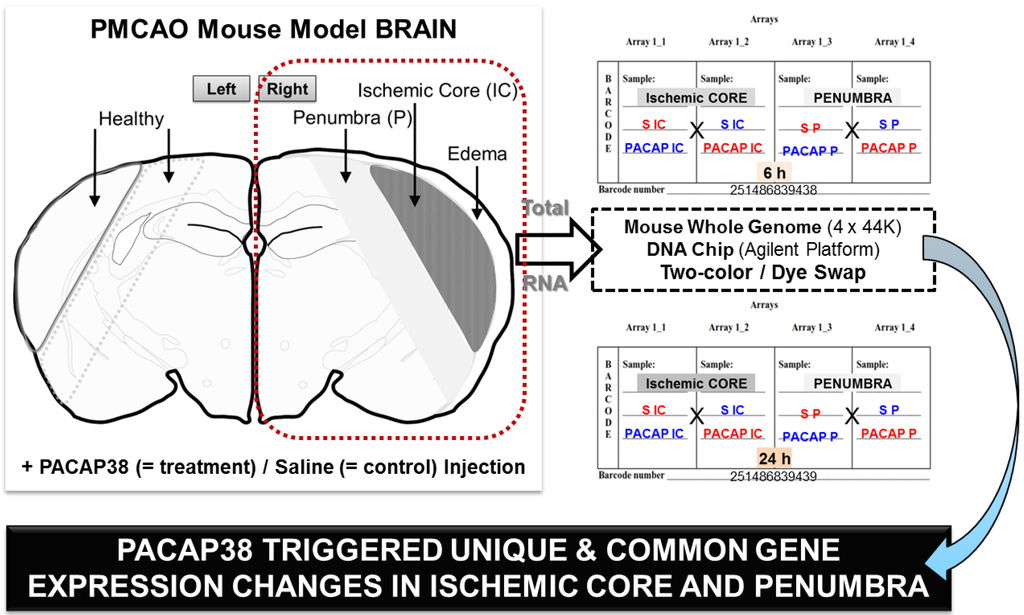