Due to the limitations on the capabilities of current robots regarding task learning and performance, imitation is an efficient social learning approach that endows a robot with the ability to transmit and reproduce human postures, actions, behaviors, etc., as a human does. Stable whole-body imitation and task-oriented teleoperation via imitation are challenging issues. In this paper, a novel comprehensive and unrestricted real-time whole-body imitation system for humanoid robots is designed and developed. To map human motions to a robot, an analytical method called geometrical analysis based on link vectors and virtual joints (GA-LVVJ) is proposed. In addition, a real-time locomotion method is employed to realize a natural mode of operation. To achieve safe mode switching, a filter strategy is proposed. Then, two quantitative vector-set-based methods of similarity evaluation focusing on the whole body and local links, called the Whole-Body-Focused (WBF) method and the Local-Link-Focused (LLF) method, respectively, are proposed and compared. Two experiments conducted to verify the effectiveness of the proposed methods and system are reported. Specifically, the first experiment validates the good stability and similarity features of our system, and the second experiment verifies the effectiveness with which complicated tasks can be executed. At last, an imitation learning mechanism in which the joint angles of demonstrators are mapped by GA-LVVJ is presented and developed to extend the proposed system. View Full-Text
Keywords: humanoid robot; whole-body imitation; social learning; motion mapping; teleoperation for tasks; similarity evaluation humanoid robot; whole-body imitation; social learning; motion mapping; teleoperation for tasks; similarity evaluation
►▼ Show Figures 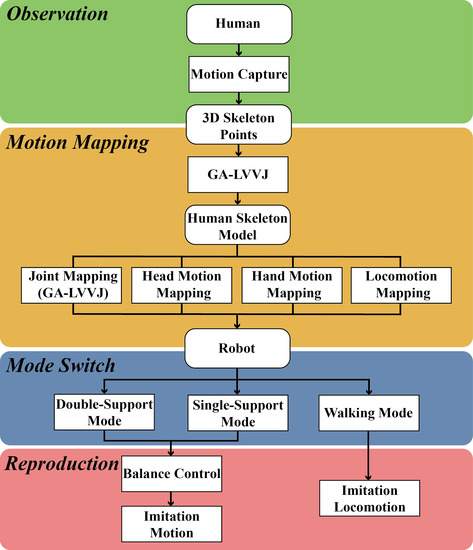