Microtab Design and Implementation on a 5 MW Wind Turbine

Microtabs (MT) consist of a small tab placed on the airfoil surface close to the trailing edge and perpendicular to the surface. A study to find the optimal position to improve airfoil aerodynamic performance is presented. Therefore, a parametric study of a MT mounted on the pressure surface of an airfoil has been carried out. The aim of the current study is to find the optimal MT size and location to increase airfoil aerodynamic performance and to investigate its influence on the power output of a 5 MW wind turbine. Firstly, a computational study of a MT mounted on the pressure surface of the airfoil DU91W(2)250 has been carried out and the best case has been found according to the largest lift-to-drag ratio. This airfoil has been selected because it is typically used on wind turbine, such as the 5 MW reference wind turbine of the National Renewable Energy Laboratory (NREL). Second, Blade Element Momentum (BEM) based computations have been performed to investigate the effect of the MT on the wind turbine power output with different wind speed realizations. The results show that, due to the implementation of MTs, a considerable increase in the turbine average power is achieved. View Full-Text
Keywords: microtab; aerodynamics; flow control; airfoil; wind turbine microtab; aerodynamics; flow control; airfoil; wind turbine
►▼ Show Figures 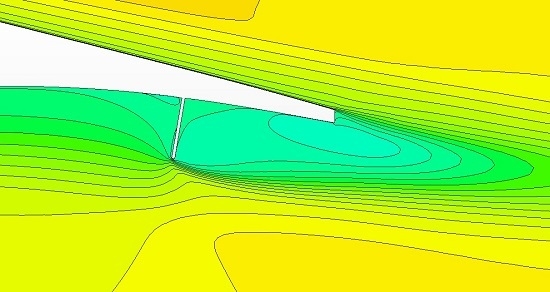