Controls on Deuterium Excess across Asia
Next Article in Special Issue

Can Indigenous Knowledge Contribute to the Sustainability Management of the Aspiring Rio Coco Geopark, Nicaragua?
Previous Article in Journal

Morphodynamic Trends of the Ribb River, Ethiopia, Prior to Dam Construction
Previous Article in Special Issue

Majella National Park is located in the central Apennines (Italy), in a vast mountainous area of about 740 km2. Owing to the complex geological history of the Majella Massif and surrounding areas, it features many different landforms. Woodlands rich in water characterize the wide tectonic depression of Caramanico, which separates the rounded gentle profile of the Majella to the east from the impervious steep slope of the Morrone Mt. to the west. Bare pitted highlands, like lunar landforms, characterize the top of the Majella (i.e., Femmina Morta Valley) shaped by flowing ice that long ago covered the higher parts of the massif. Sedimentary structures and fossil content recovered in carbonates attest to a long period of sedimentation in warm, shallow-marine environments, revealing that the Majella and the surrounding carbonate mountains looked, approximately from 140 to 7 Ma, like the present-day Bahamas and Persian Gulf. The Park hosts at least 95 geosites, some of which (22) are well-known in the international literature because of their scientific relevance. In addition, its natural and cultural wealth, deeply fused together with geoheritage, preserves several features of national and world rarity. Therefore, the Park Authority decided to put forward its territory as a candidate to become part of the United Nations Educational, Scientific and Cultural Organization (UNESCO) Global Geoparks Network. View Full-Text
Keywords: aspiring geopark; geosite; Majella; central Apennines; Meso-Cenozoic; carbonate platform aspiring geopark; geosite; Majella; central Apennines; Meso-Cenozoic; carbonate platform
►▼ Show Figures 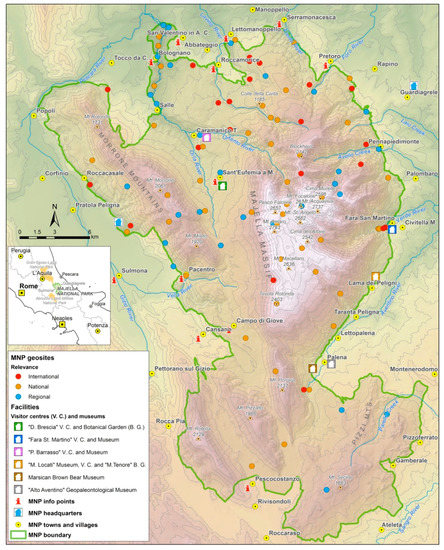