Preliminary Modeling of Rockfall Runout: Definition of the Input Parameters for the QGIS Plugin QPROTO

The identification of the most rockfall-prone areas is the first step of the risk assessment procedure. In the case of land and urban planning, hazard and risk analyses involve large portions of territory, and thus, preliminary methods are preferred to define specific zones where more detailed computations are needed. To reach this goal, the QGIS-based plugin QPROTO was developed, able to quantitatively compute rockfall time-independent hazard over a three-dimensional topography on the basis of the Cone Method. This is obtained by combining kinetic energy, passing frequency and detachment propensity of each rockfall source. QPROTO requires the definition of few angles (i.e., the energy angle and the lateral angle ) that should take into account all the phenomena occurring during the complex block movement along the slope. The outputs of the plugin are a series of raster maps reporting the invasion zones and the quantification of both the susceptibility and the hazard. In this paper, a method to relate these angles to some characteristics of the block (volume and shape) and the slope (inclination, forest density) is proposed, to provide QPROTO users with a tool for estimating the input parameters. The results are validated on a series of case studies belonging to the north-western Italian Alps. View Full-Text
Keywords: rockfall hazard; rockfall runout; QGIS; QPROTO; cone method rockfall hazard; rockfall runout; QGIS; QPROTO; cone method
►▼ Show Figures 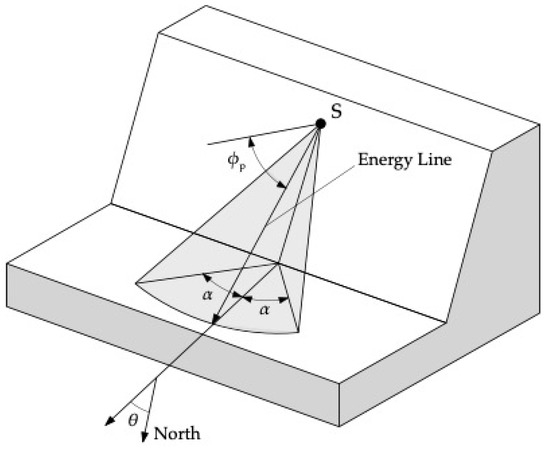