In Situ Block Size Distribution Aimed at the Choice of the Design Block for Rockfall Barriers Design: A Case Study along Gardesana Road

When studying rockfall phenomena, a single value of the block volume is not sufficient to take into account the natural variability of the geometrical features (orientation, spacing, persistence) of the discontinuity sets. Different approaches for obtaining cumulative distributions of potentially detachable block volumes are compared. A highly fractured rock mass outcropping along the western Lake Garda (Italy), consisting of prevailing limestone and interbedded marls, is studied in detail from geological and geostructural points of view. Then, a representative rock face has been selected and analyzed with traditional and non-contact survey methods to identify the main discontinuity sets and to collect spacing samples. Based on these data, in situ block size distributions for different combinations of sets are built following statistically-based approaches, without the use of a Discrete Fracture Network (DFN) generator. The validation of the obtained distributions is attempted based on the detached block surveyed at the foot of the slope. However, in this particular case study, the detached blocks cover only a minimal volume range compared to both theoretical values and visible rockfall scars. The fallen rock blocks have a marginal role in design block determination, since their volume depends on geological discontinuities (bedding and fractures) and could be affected by other processes after the detachment (e.g., fragmentation). The procedure here described should be standard practice in the study of rockfall events, and it should be uniform in European standards such as Eurocodes. Future developments should involve the scientific community for setting the percentiles of the probability distribution to be considered for block design definition. View Full-Text
Keywords: rockfall; spacing; block volume; IBSD; Lake Garda rockfall; spacing; block volume; IBSD; Lake Garda
►▼ Show Figures 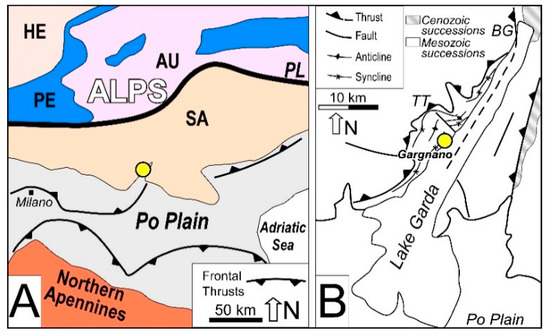