Complex of Geophysical Studies of the Seyakha Catastrophic Gas Blowout Crater on the Yamal Peninsula, Russian Arctic
Next Article in Special Issue

A Probabilistic Assessment of Soil Erosion Susceptibility in a Head Catchment of the Jemma Basin, Ethiopian Highlands
Previous Article in Journal

The long term effects of applying livestock manures as soil amendment are well known. However, these manures usually contain high soluble salts content, which could increase the soil salinity and sodicity within a short time after their application. The aim of this study was to investigate the short term effects of animal manure application on soil structure stability, infiltration rate (IR), and runoff and soil erosion formation under rainfall conditions. Two soils, a non-calcareous, sandy soil with 0.2% organic matter, and a calcareous, clayey soil with 4.7% organic matter were sampled from a semiarid region. The soils were mixed with raw cattle manure or with compost, and soils with no addition were considered as a control. The two soils with the three treatments were incubated for 21 days, and then subjected to 80 mm of simulated rainstorm. In contradiction to previous works, it was found that the manure reduced soil structure stability, reduced infiltration, increased surface runoff and led to soil loss. The negative impact of the raw manure on soil structure was stronger than that of the mature compost. The findings of this study indicate the high sensitivity of arable soils to erosion processes during the first few weeks following the addition of manure to the soil, and therefore could contribute to the decision-making process of the timing of manure application, namely to make sure that the manure is applied well before the rainy season, in order to avoid the aforementioned soil erosion. View Full-Text
Keywords: soil conservation; organic soil amendments; soil erosion soil conservation; organic soil amendments; soil erosion
►▼ Show Figures 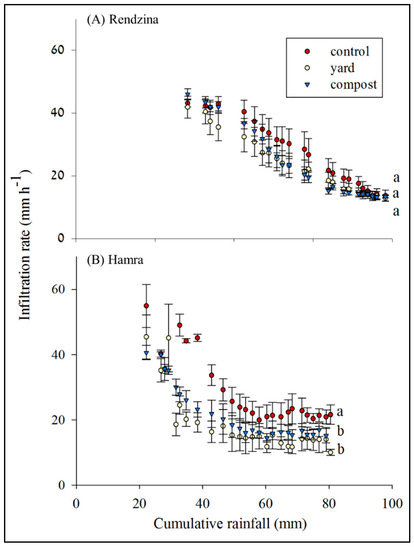