Tail Docking of Canine Puppies: Reassessment of the Tail’s Role in Communication, the Acute Pain Caused by Docking and Interpretation of Behavioural Responses

Early postnatal nutrition may have a significant subsequent impact on metabolic disorders during the entire lifespan of lambs. The aim of the present study was to describe the changes in biochemical, immunological, hepatic, and ruminal parameters of fattening lambs derived from early feed restriction during the suckling phase. Twenty-four merino lambs (average body weight, BW, 4.81 ± 0.256 kg) were used, 12 of them were milk-fed ad libitum (ADL) remaining permanently with their dams, whereas the other 12 lambs (restricted, RES) were subjected to milk restriction. After weaning, all the lambs were fed 35 g/kg BW per day of the same complete pelleted diet to ensure no differences between groups in dry matter intake (603 vs. 607 g/day for ADL and RES lambs, respectively, p = 0.703), and were slaughtered at a BW of 27 kg. Biochemical profiles revealed higher concentrations of ceruloplasmin and low-density lipoproteins, whereas insulin concentration was lower in the RES lambs compared to the ADL group. Liver thiobarbituric acid reactive substances were lower in the RES lambs. No significant differences in ruminal or blood immunological parameters were found. In conclusion, early feed restriction promoted metabolic disorders not related to ruminal acidosis occurrence, which can compromise the health status during the fattening period of merino lambs. View Full-Text
Keywords: metabolic syndrome; nutritional programming; inflammation; ruminal acidosis; feed efficiency; microbiota metabolic syndrome; nutritional programming; inflammation; ruminal acidosis; feed efficiency; microbiota
►▼ Show Figures 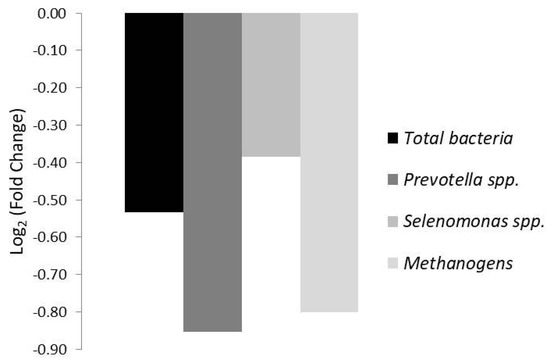