Necessary, but Not Sufficient. The Benefit Concept in the Project Evaluation of Animal Research in the Context of Directive 2010/63/EU
Next Article in Special Issue

“Pets Negotiable”: How Do the Perspectives of Landlords and Property Managers Compare with Those of Younger Tenants with Dogs?
Previous Article in Special Issue

Virtual fencing has the potential to be implemented in animal management systems where conventional fencing cannot be applied. Previous work has been conducted on cattle with virtual fencing technology that uses a collar that emits a warning audio when an animal approaches a GPS set boundary. If the animal continues walking towards the boundary an electric stimulus is applied. Less research has been conducted on sheep virtual fencing, so alternatives need to be explored to test the proof of concept on the application of virtual fencing with sheep. Using manually controlled training collars, 30 crossbred sheep were trained to respond to an audio cue in order to avoid receiving a low-level electrical stimulus.

To ensure animal welfare isn’t compromised when using virtual fencing, animals must be able to associate a benign conditioned stimulus with an aversive stimulus. This study used an associative learning test to train 30, four-year-old, Merino x Suffolk ewes, to associate an audio cue with an electric stimulus. Collars manually controlled by a GPS hand-held unit were used to deliver the audio and electric stimuli cues. For the associative learning, when sheep approached an attractant at a distance of three m from the trough, an audio cue was applied for one s. If the sheep stopped or changed direction, the audio cue ceased immediately and no electrical stimulus was applied. If the sheep did not respond to the audio cue it was followed by a low-level electrical stimulus. Approaches to the attractant significantly decreased from day one to day two. It took a mean of three pairings of the audio cue and electrical stimulus for a change in behaviour to occur, after which sheep that approached the attractant had a 52% probability of avoiding the electrical stimulus and responding to the audio cue alone. Further research is required to determine whether sheep can be trained to associate an audio cue with a negative stimulus for use in group grazing situations. View Full-Text
Keywords: virtual fencing; technology; welfare; associative learning; sheep management virtual fencing; technology; welfare; associative learning; sheep management
►▼ Show Figures 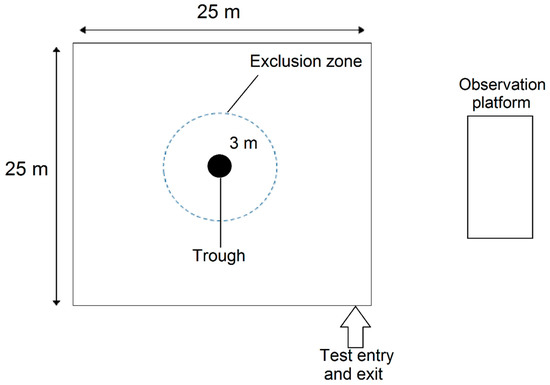