The world buffalo population is about 168 million, and it is still growing, in India, China, Brazil, and Italy. In these countries, buffalo genetic breeding programs have been performed for many decades. The occurrence of congenital malformations has caused a slowing of the genetic progress and economic loss for the breeders, due to the death of animals, or damage to their reproductive ability or failing of milk production. Moreover, they cause animal welfare reduction because they can imply foetal dystocia and because the affected animals have a reduced fitness with little chances of survival. This review depicts, in the river buffalo (Bubalus bubalis) world population, the present status of the congenital malformations, due to genetic causes, to identify their frequency and distribution in order to develop genetic breeding plans able to improve the productive and reproductive performance, and avoid the spreading of detrimental gene variants. Congenital malformations most frequently reported in literature or signaled by breeders to the Department of Veterinary Medicine and Animal Production of the University Federico II (Naples, Italy) in river buffalo are: musculoskeletal defects (transverse hemimelia, arthrogryposis, umbilical hernia) and disorders of sexual development. In conclusion this review put in evidence that river buffalo have a great variety of malformations due to genetic causes, and TH and omphalocele are the most frequent and that several cases are still not reported, leading to an underestimation of the real weight of genetic diseases in this species. View Full-Text
Keywords: congenital malformation; river buffalo; disorders of sexual development; genetic musculoskeletal defects congenital malformation; river buffalo; disorders of sexual development; genetic musculoskeletal defects
►▼ Show Figures 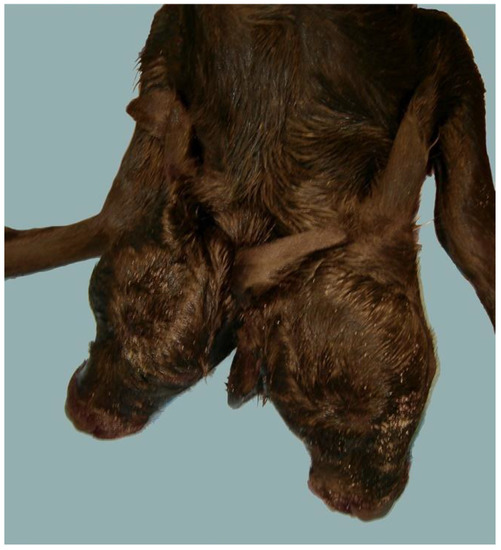