An Investigation into the Relationship between Owner Knowledge, Diet, and Dental Disease in Guinea Pigs (Cavia porcellus)

When pit bull-type dogs are seized in an investigation of organized dogfighting, heavily scarred dogs are often assumed to be highly dog aggressive due to a history of fighting. These dogs may be deemed dangerous and euthanized based on scarring alone. We analyzed our existing data on dogs seized from four dogfighting investigations, examining the relationship between the dogs’ scars with aggression towards other dogs. Scar and wound data were tallied in three body zones where dogfighting injuries tend to be concentrated. Dog aggression was assessed using a model dog and a friendly stimulus dog in a standardized behavior evaluation. Scarring and dog aggression were significantly related, more strongly among male (Fisher’s Exact < 0.001) than female dogs (Fisher’s Exact = 0.05). Ten or more scars in the three body zones was a reasonable threshold with which to classify a dog as high risk for dog aggression: 82% of males and 60% of females with such scarring displayed dog aggression. However, because many unscarred dogs were dog aggressive while some highly scarred dogs were not, we recommend collecting behavioral information to supplement scar counts when making disposition decisions about dogs seized in dogfighting investigations. View Full-Text
Keywords: dogfighting; dog; aggression; veterinary; behavior; forensic; scar; wound; animal cruelty dogfighting; dog; aggression; veterinary; behavior; forensic; scar; wound; animal cruelty
►▼ Show Figures 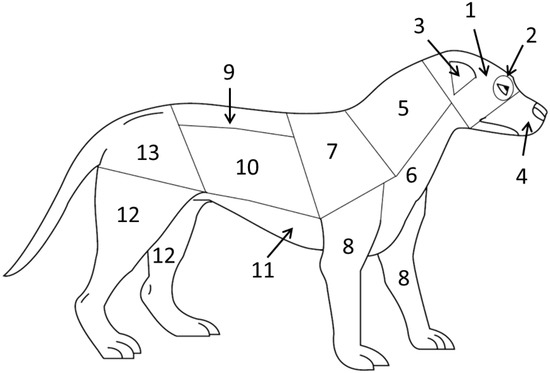