Influence of Gonadectomy on Canine Behavior

Veterinarians are expected to advise the owners if and when their dog’s gonadectomy should be performed and let them know if this might affect their animal’s behavior. Unfortunately, due to the lack of unequivocal scientific evidence, veterinarians differ in their opinion, with consequent diversity in advice to owners, contributing to the lack of clarity. This study aimed to evaluate the effects of gonadectomy on dog behavior across time. A total of 96 dogs, 48 gonadectomized (15 males and 33 females) and 48 entire (17 males and 31 females), were analyzed. Their owners were interviewed at time 0 (pre-surgery) and nine months later to obtain information about their dogs’ behavior. Eating behavior and dog’s weight did not show any significant changes across time in the two groups in both sexes. Gonadectomized male dogs were reported to show less mounting behavior, pull on the leash, and owner-directed aggression. Marking behavior did not vary across time for both groups of dogs. These results may contribute to shed light on which behaviors can be modified by gonadectomy over a nine-month period. However, differences in the reduction in the various types of behavior suggest that further studies of gonadectomy’s role in behavior should be conducted.

Due to the lack of unequivocal scientific evidence, gonadectomy’s effects on dogs’ behavior are still debated. Since veterinarians differ in their opinion, there may be considerable diversity in the advice received by owners. This study aimed to evaluate the effects of gonadectomy on dog behavior across time. Ninety-six dog owners (48 control dogs and 48 experimental dogs) were interviewed twice (T0 and T1, nine months later) to obtain information about their dog’s behavior. No change was found in the eating behavior or weight of dogs of both groups. Compared to T0, at T1, experimental dogs were reported to show less mounting behavior, pull on the leash, and roaming behaviors. Marking behavior did not vary across time for both groups of dogs. A tendency to reduce owner-directed aggression was observed at T1 for experimental male dogs, while no change was observed for male controls. The literature reports conflicting information about the effect of gonadectomy on behavior, suggesting that further studies about this topic should be undertaken. View Full-Text
Keywords: dog; gonadectomy; behavior dog; gonadectomy; behavior
►▼ Show Figures 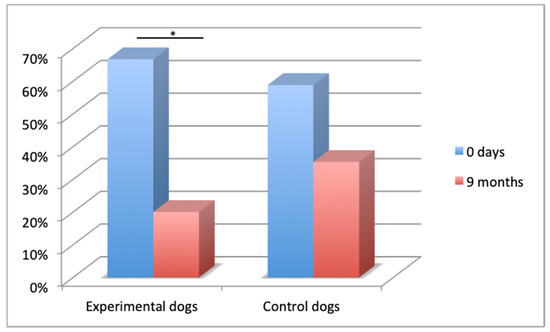