Forest grouses are among the most endangered ground-nesting birds in Central Europe. Their rapid population decline was associated with habitat loss and increasing predation risk leading to low breeding success. The aim of this study was to describe black grouse nest predators and potential predation risk in a study area with a small, extant population of black grouse (Ore Mts.) and in a study area with an already extinct grouse population (Jeseníky Mts.) in the Czech Republic. In order to determine the predation intensity to black grouse nests, 50 artificial nests (28 in Ore Mts., 22 in Jeseníky Mts.) were monitored using camera traps. The results showed that 56% of nests were predated. Within the time needed for successful incubation of the eggs (25 days), the nest survival probability was on average 45.5%. The proportion of depredated nests did not differ between habitat types (i.e., open forest interior, clearing, forest edge). The stone marten was the main potential nest predator in both study areas (39% in total), followed by common raven (25%) and red fox (22%). In conclusion, our study revealed the high predation pressure on black grouse nests which corresponds with increasing population trends of mesopredators and wild boars in Central Europe. 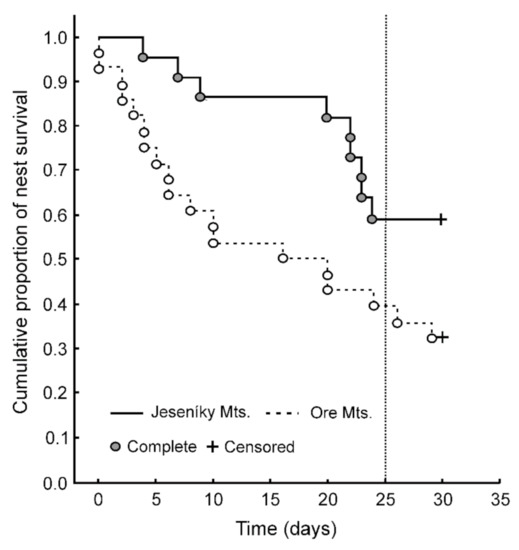