The Impact of the Sex of Handlers and Riders on the Reported Social Confidence, Compliance and Touch Sensitivity of Horses in Their Care

Any influence of the sex of the human partner in human–horse interactions on the behaviour of horses is currently largely anecdotal. Associations between the sex of humans and equine behaviour may have welfare implications. Our study investigates observations of ridden and non-ridden horse behaviour, as reported by respondents (n = 1420) to the Equine Behaviour and Research Questionnaire (E-BARQ). Results reveal some human sex-related differences between horses handled and ridden by male and female humans. Horses ridden or handled by male humans were more likely to be difficult to catch and defensive when approached, but less likely to pull on the reins/brace the neck or toss their head. The study revealed the importance of considering the sex of the rider or handler when investigating equine behaviour.

Current evidence of how human sex-related differences in riders and handlers may influence horse behaviour is limited. The Equine Behaviour Assessment and Research Questionnaire (E-BARQ) was used to collect demographic data on riders and handlers (n = 1420) and behavioural data on their horses. It includes demographic items about the sex of the respondent and how frequently the horse has been ridden or handled by male and female humans. The questionnaire then gathers observations on the horse’s behaviour on the ground and under saddle or when driven. Using E-BARQ’s battery of 97 questions, the current study showed differences in ridden and non-ridden horse behaviour that were related to the sex of the rider or handler. Data were evaluated using multivariate analysis and revealed that horses handled by male humans were significantly more difficult to catch (t-value = −3.11; p = 0.002) and significantly more defensive when approached (t-value = −2.104; p = 0.035), but significantly less likely to pull on the reins/brace the neck or toss their head (t-value 1.980; p = 0.048) than horses handled more frequently by female humans. The differences found between male and female horse handlers suggest that sex is an important factor to consider when understanding equine behaviour. Our study explored reported differences in confidence, handling and working compliance and touch sensitivity among horses ridden and handled by male and female humans and suggested further research into how these differences are gendered. View Full-Text
Keywords: equine behaviour; rider sex; horse welfare; welfare equine behaviour; rider sex; horse welfare; welfare
►▼ Show Figures 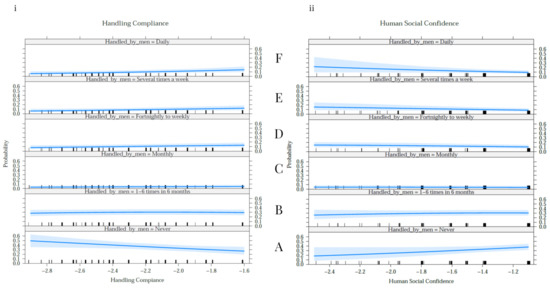