Fusarium, an Entomopathogen—A Myth or Reality?

Fusarium avenaceum and closely related species are common fungi on various plants, cultivated in different climatic regions. The aim of this study was to determine the taxonomic affiliations of the F. avenaceum, Fusarium arthrosporioides, and Fusarium anguioides strains by using morphological, physiological and molecular-genetic approaches. Twenty-six single-spored morphologically identified strains, which were mainly from cereals, were investigated in order to find out, if they belong to a separate species. Pathogenicity of strains to wheat seedlings and ISSR (Inter Simple Sequence Repeats) fingerprint and beta-tubulin DNA sequence patterns were analyzed. According to phylogenetic analyses, the strains could be divided into two big groups consisting of mostly F. avenaceum or F. anguioides strains. F. arthrosporioides was not detected as a separate species by the sum of the characters. F. anguioides was characterized as a separate species, which could be identified by morphological and molecular data. High genetic diversity of the F. avenaceum and related species was revealed. One F. anguioides strain (rudbeckia, Vladivostok, Russia), had an identical beta-tubulin sequence with two previously sequenced strains of Fusarium tricinctum species complex, which were isolated from dicotyledonous plants in Asia. View Full-Text
Keywords: beta-tubulin; F. anguioides; F. arthrosporioides; F. avenaceum; ISSR; morphology; pathogenicity beta-tubulin; F. anguioides; F. arthrosporioides; F. avenaceum; ISSR; morphology; pathogenicity
►▼ Show Figures 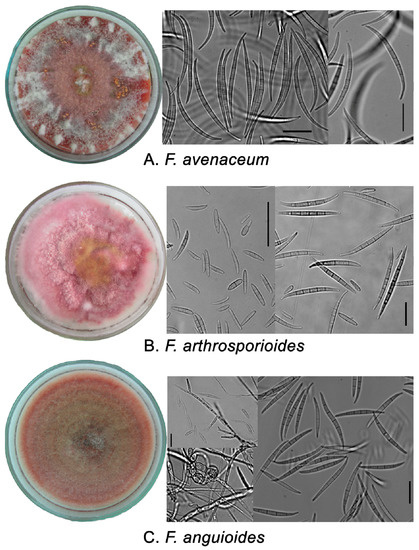