Blacklegged ticks (Ixodes scapularis Say) are the vector for pathogens that cause more cases of human disease than any other arthropod. Lyme disease is the most common, caused by the bacterial spirochete Borrelia burgdorferi (Johnson, Schmid, Hyde, Steigerwalt, and Brenner) in the northeastern United States. Further knowledge of seasonal effects on survival is important for management and modeling of both blacklegged ticks and tick-borne diseases. The focus of our study was on the impact of environmental factors on overwintering success of nymphal blacklegged ticks. In a three-year field study conducted in Connecticut and Maine, we determined that ground-level conditions play an important role in unfed nymphal overwintering survival. Ticks in plots where leaf litter and snow accumulation were unmanipulated had significantly greater survival compared to those where leaf litter was removed (p = 0.045) and where both leaf litter and snow were removed (p = 0.008). Additionally, we determined that the key overwintering predictors for nymphal blacklegged tick survival were the mean and mean minimum temperatures within a year. The findings of this research can be utilized in both small- and large-scale management of blacklegged ticks to potentially reduce the risk and occurrence of tick-borne diseases. View Full-Text
Keywords: integrated tick management; Ixodes scapularis; overwintering survival integrated tick management; Ixodes scapularis; overwintering survival
►▼ Show Figures 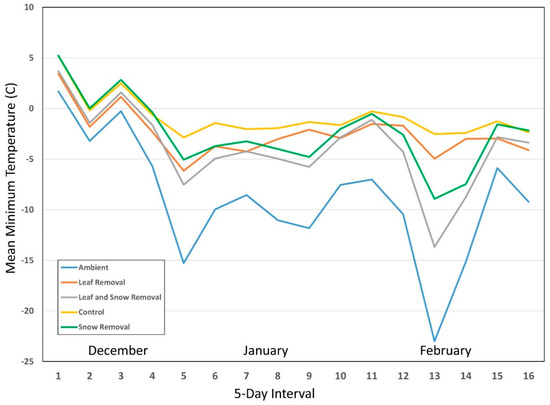