The Galactic magnetic field is an integral constituent of the interstellar medium (ISM), and knowledge of its structure is crucial to understanding Galactic dynamics. The Rotation Measures (RM) of extragalactic (EG) sources have been the basis of comprehensive Galactic magnetic field models. Polarised extended emission (XE) is also seen along lines of sight through the Galactic disk, and also displays the effects of Faraday rotation. Our aim is to investigate and understand the relationship between EG and XE RMs near the Galactic plane, and to determine how the XE RMs, a hitherto unused resource, can be used as a probe of the large-scale Galactic magnetic field. We used polarisation data from the Canadian Galactic Plane Survey (CGPS), observed near 1420 MHz with the Dominion Radio Astrophysical Observatory (DRAO) Synthesis Telescope. We calculated RMs from a linear fit to the polarisation angles as a function of wavelength squared in four frequency channels, for both the EG sources and the XE. Across the CGPS area, , the RMs of the XE closely track the RMs of the EG sources, with XE RMs about half the value of EG-source RMs. The exceptions are places where large local HII complexes heavily depolarise more distant emission. We conclude that there is valuable information in the XE RM dataset. The factor of 2 between the two types of RM values is close to that expected from a Burn slab model of the ISM. This result indicates that, at least in the outer Galaxy, the EG and XE sources are likely probing similar depths, and that the Faraday rotating medium and the synchrotron emitting medium have similar variation with galactocentric distance. View Full-Text
Keywords: galaxy: structure; ISM: magnetic fields; polarization; radio continuum: ISM; techniques: interferometric galaxy: structure; ISM: magnetic fields; polarization; radio continuum: ISM; techniques: interferometric
►▼ Show Figures 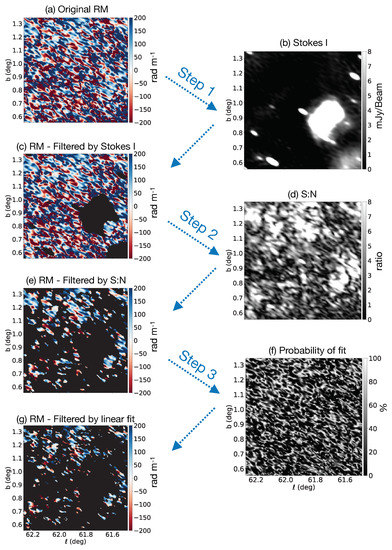