MicroRNAs (miRNAs) are endogenous, small (18–23 nucleotides), non-coding RNA molecules. They regulate the posttranscriptional expression of their target genes. MiRNAs control vital physiological processes such as metabolism, development, differentiation, cell cycle and apoptosis. The control of the gene expression by miRNAs requires efficient binding between the miRNA and their target mRNAs. Genome-wide association studies (GWASs) have suggested the association of single-nucleotide polymorphisms (SNPs) with certain diseases in various populations. Gene polymorphisms of miRNA target sites have been implicated in diseases such as cancers, diabetes, cardiovascular and Parkinson’s disease. Likewise, gene polymorphisms of miRNAs have been reported to be associated with diseases. In this review, we discuss the SNPs in miRNA genes that have been associated with diabetes and atherosclerotic cardiovascular disease in different populations. We also discuss briefly the potential underlining mechanisms through which these SNPs increase the risk of developing these diseases. View Full-Text
Keywords: diabetes mellitus; cardiovascular disease; atherosclerosis; MicroRNA; single nucleotide polymorphisms (snps) diabetes mellitus; cardiovascular disease; atherosclerosis; MicroRNA; single nucleotide polymorphisms (snps)
►▼ Show Figures 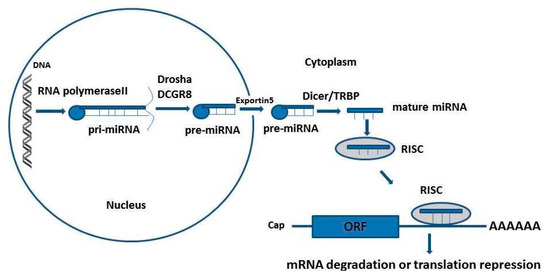