CFTR Modulators: Does One Dose Fit All?
Previous Article in Journal

Tommy B. Andersson
1 and

In this study, we aimed to evaluate the utility of endogenous 1β-hydroxy-deoxycholic acid/total deoxycholic acid ratio (1β-OH-DCA/ToDCA) in spot urine as a surrogate marker of cytochrome P450 3A (CYP3A) activity in the assessment inhibition-based drug–drug interactions in healthy volunteers. This was accomplished through an open-label, three-treatment parallel-arm study in healthy male volunteers from Zimbabwe. Each group received itraconazole (ITZ; 100 mg once daily; n = 10), fluconazole (FKZ; 50 mg once daily; n = 9), or alprazolam (APZ; 1 mg once daily; n = 8) orally. Midazolam (MDZ), dosed orally and intravenously, was used as a comparator to validate the exploratory measures of CYP3A activity and the effects of known inhibitors. Urinary metabolic ratios of 1β-OH-DCA/ToDCA before and after CYP3A inhibitor treatment showed a similar magnitude of inhibitory effects of the three treatments as that measured by oral MDZ clearance. The maximum inhibition effect of a 75% reduction in the 1β-OH-DCA/ToDCA ratio compared to the baseline was achieved in the ITZ group following six once-daily doses of 100 mg. The correlations of the two markers for CYP3A inhibitor treatment were significant (rs = 0.53, p < 0.01). The half-life of urinary endogenous 1β-OH-DCA/ToDCA was estimated as four days. These results suggested that 1β-OH-DCA/ToDCA in spot urine is a promising convenient, non-invasive, sensitive, and relatively quickly responsive endogenous biomarker that can be used for CYP3A inhibition-based drug–drug interaction in clinical studies. View Full-Text
Keywords: CYP3A; biomarker; human; deoxycholic acid; 1β-hydroxy-deoxycholic acid; urine; midazolam; drug–drug interaction CYP3A; biomarker; human; deoxycholic acid; 1β-hydroxy-deoxycholic acid; urine; midazolam; drug–drug interaction
►▼ Show Figures 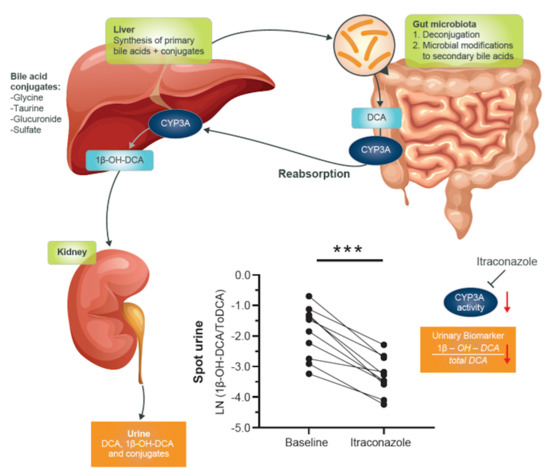