Production, Purification, and Applications of a Potential Theranostic Pair: Cobalt-55 and Cobalt-58m
Next Article in Special Issue

Availability and Use of Mobile Health Technology for Disease Diagnosis and Treatment Support by Health Workers in the Ashanti Region of Ghana: A Cross-Sectional Survey

About 30% of children with drug-resistant epilepsy (DRE) continue to have seizures after epilepsy surgery. Since epilepsy is increasingly conceptualized as a network disorder, understanding how brain regions interact may be critical for planning re-operation in these patients. We aimed to estimate functional brain connectivity using scalp EEG and its evolution over time in patients who had repeated surgery (RS-group, n = 9) and patients who had one successful surgery (seizure-free, SF-group, n = 12). We analyzed EEGs without epileptiform activity at varying time points (before and after each surgery). We estimated functional connectivity between cortical regions and their relative centrality within the network. We compared the pre- and post-surgical centrality of all the non-resected (untouched) regions (far or adjacent to resection) for each group (using the Wilcoxon signed rank test). In alpha, theta, and beta frequency bands, the post-surgical centrality of the untouched cortical regions increased in the SF group (p < 0.001) whereas they decreased (p < 0.05) or did not change (p > 0.05) in the RS group after failed surgeries; when re-operation was successful, the post-surgical centrality of far regions increased (p < 0.05). Our data suggest that removal of the epileptogenic focus in children with DRE leads to a gain in the network centrality of the untouched areas. In contrast, unaltered or decreased connectivity is seen when seizures persist after surgery. View Full-Text
Keywords: electroencephalography; epilepsy; epilepsy surgery; functional connectivity; brain networks; children; source imaging; neuroimaging; clinical neurophysiology electroencephalography; epilepsy; epilepsy surgery; functional connectivity; brain networks; children; source imaging; neuroimaging; clinical neurophysiology
►▼ Show Figures 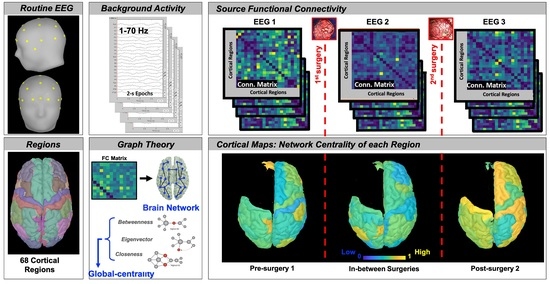