Ladle Steel Slag in Activated Systems for Construction Use

The purpose of this study is to show the patterns of distribution of disseminated sulfide in layered rocks based on the numerous geochemical and mineralogical data obtained for eight boreholes of the Norilsk intrusion (southern part of the Norilsk 1 deposit). There is a common trend of sulfide liquid fractionation in the Main Ore Horizon, which is composed of picritic and taxite (or olivine) gabbro-dolerites: the Ni/Cu in both rock types decreases down all sections, indicating an increase in the degree of fractionation of the sulfide liquid from top to bottom. On the contrary, the Ni/Fe ratios in pentlandite increase in this direction due to an increase in sulfur fugacity. However, picrite and taxite/olivine gabbro-dolerites are very distinctly separated by Ni/Cu values: these values are >1 in picritic gabbro-dolerite while they are always <1 in taxite/olivine gabbro-dolerite. These rock types are distinguished by sulfide assemblages. The first includes troilite, Fe-rich pentlandite, chalcopyrite, cubanite, talnahite, bornite and copper (low sulfur association); the second one is composed of monoclinic pyrrhotite, chalcopyrite, Ni-rich pentlandite and pyrite (high sulfur association). A two-stage magma injection with different ore specializations is supposed for picritic and taxite/olivine gabbro-dolerites. View Full-Text
Keywords: Norilsk 1 intrusion; platinum–copper–nickel deposits; disseminated ores; mineralogy and geochemical features Norilsk 1 intrusion; platinum–copper–nickel deposits; disseminated ores; mineralogy and geochemical features
►▼ Show Figures 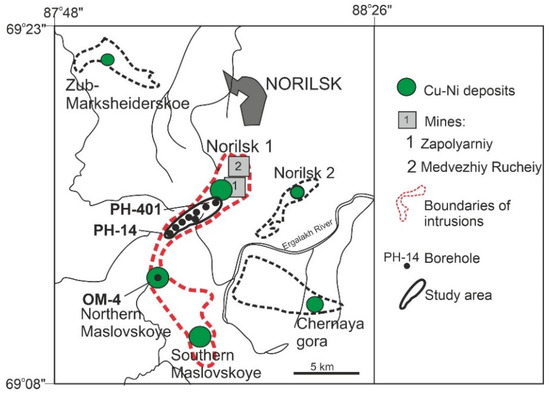