Sulfates from the Pyrite Ore Deposits of the Apuan Alps (Tuscany, Italy): A Review
Previous Article in Special Issue

Geochemistry of Tourmaline from the Laodou Gold Deposit in the West Qinling Orogen, Central China: Implications for the Ore-Forming Process

Gold Mineralization at the Maletoyvayam Deposit (Koryak Highland, Russia) and Physicochemical Conditions of Its Formation

Microthermometry study of fluid inclusions in quartz veins of the Maletoyvayam deposit (Koryak Highland, Russia) was carried out. This epithermal gold deposit contains unique Au compounds including maletoyvayamite, which has not been reported anywhere else. Two paragenetic mineral associations (pyrite-quartz and maletoyvayamite-quartz) with quartz of different generations corresponding to different pulses were also described. Only early generations of quartz (Q1) include ore minerals: pyrite for the first mineral assemblage, and in Au-bearing minerals, sulfosalts, bismuthinite, and others—for the second assemblage. A study on fluid inclusions in quartz showed a salinity (mainly NaCl + KCl) range from 0.2 to 4.3 wt.% NaCl eq., increasing from the first mineral association to the second due to boiling fluids. The obtained temperature variations for quartz crystallization were 295–135 °C, the fluid pressure ranged from 79 to 4 bar. On the other hand, the range of conditions obtained for the gold productive ore association is more narrow: salinity of the fluid inclusions is 4.3 wt.% NaCl eq., the temperatures vary from 255 °C to 245 °C, and the pressure from 39 to 32 bar. These physicochemical characteristics of the Maletoyvayam ore deposit greatly coincide with other HS-type epithermal deposits; however, within the Central Kamchatka Volcanic Belt it is so far the only deposit of this type reported. View Full-Text
Keywords: Central Kamchatka Volcanic Belt; HS epithermal deposit; maletoyvayamite-quartz association; fluid inclusions; gold Central Kamchatka Volcanic Belt; HS epithermal deposit; maletoyvayamite-quartz association; fluid inclusions; gold
►▼ Show Figures 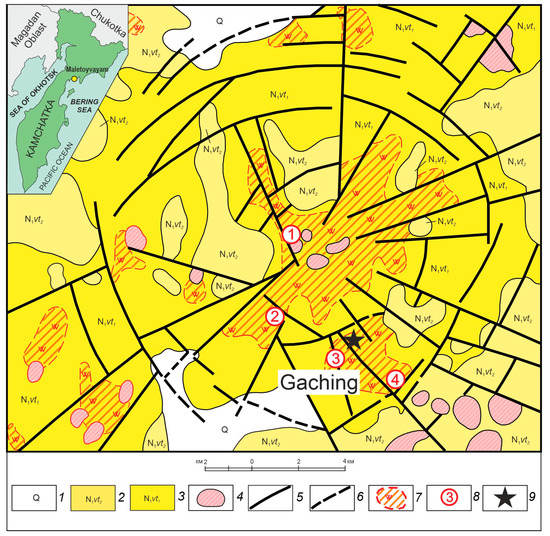