For an independent Mecanum-wheeled mobile robot, the wheel configurations can be mainly divided into two categories: centripetal configuration and symmetrical rectangular configuration [24], as shown in Figure 1. In Figure 1, the Mecanum wheel is represented by a rectangle with an oblique line in the middle, in which the oblique line represents the bottom roller that contacts with the ground. In the former configuration, the axles of all wheels intersect at the same intersection point, as shown in Figure 1a. In Figure 1a, the centerline of the mobile robot coordinate system and wheel local coordinate system is collinear with coordinate axis . In order to balance the load of each wheel, the wheels are evenly distributed in a 360° circumference. This centripetal configuration of an omnidirectional mobile robot usually composes of three [1,26] or four [27] Mecanum wheels. In the symmetrical rectangular configuration in Figure 1b, the Mecanum wheels are symmetrically arranged on both sides of the line going through the center of the robot, and the overall structure is rectangular. Based on the study of the kinematics constraints of a single Mecanum wheel, the kinematics model of an n-Mecanum-wheel mobile robot can be further derived, and then the omnidirectional motion characteristics of the mobile systems can be analyzed.

3.1. Conditions for Omnidirectional Motion of a Mecanum-Wheeled Mobile Robot System

3.2. Relation Between the Roller Axle Intersection Points Number on Three Mecanum Wheels and the Column Rank of the Jacobian Matrix

3.2.1. No Intersection of the Three Bottom-Rollers Axles

3.2.2. The Axles of the Three Bottom-Rollers Intersect at One Point

3.2.3. The Axles of the Three Bottom-Rollers Intersect at Two Points

According to the hypothesis, when two roller axles intersect at one point, the other roller axe must be parallel to one of the roller axles. As shown in Figure 5, if any two roller axles coincide, the result will inevitably be transformed into the case of axles intersecting at one point. The coordinate system is established by arbitrarily choosing one of the intersections as the origin , and the local wheel coordinate system () is also established in counterclockwise order. The relationship of the parameters is shown in Table 3.
The system coordinate system is established at the intersection of the roller axles of wheel and wheel , then we can obtain
The roller axles of wheels and are parallel to each other, and the following relations are established
Thus, the matrix M can be obtained ad
The determinant of matrix M is
Combining with the discussion in Section 3.2.2, the roller axle of wheel does not coincide with the straight line , so or , then, .
Because the roller axles of wheels and intersect at one point, or and , then, the following is established then,
In the mobile system consisting of three Mecanum wheels, if the axles of the three bottom-rollers intersect at two points, there is no singularity in the system, and the Jacobian matrix of the inverse kinematics velocity is a column full rank matrix. The mobile system can realize omnidirectional movement in the plane.

3.2.4. The Axles of the Three Bottom-Rollers Intersect at Three Points

When the axles of the three bottom-rollers intersect at three points, no two axles of the bottom-rollers can be parallel or coincide with each other, as shown in Figure 6. The coordinate system is established by arbitrarily selecting one of the intersections as the origin. The relationship of the parameters is shown in Table 4.
The coordinate system is established at the intersection point of roller axles of wheel and wheel . The following formula can be obtained
The matrix M can be obtained
The determinant of matrix M is
According to the discussion results in Section 3.2.2 and Section 3.2.3, we can obtain
Roller axles of wheel and wheel intersect at one point, (); therefore, . The value is substituted into Formula (35), we can obtain then,
In a mobile system consisting of three Mecanum wheels, if the axles of the three bottom-rollers intersect at three points, there is no singularity in the system, and the Jacobian matrix of the inverse kinematics velocity satisfies the column full-rank condition, and the mobile system can achieve omnidirectional motion in the plane.
According to the deduction of Formula (17) and the analysis results of the number of intersection points mentioned above, the condition for the omnidirectional motion of the mobile system composed of multiple Mecanum wheels (three wheels or more) is that any three axles of bottom-rollers in contact with the ground in three Mecanum wheels intersect at two or three points, which can be called a ‘bottom-roller axle intersections approach. Table 5 illustrates the three-Mecanum-wheel configurations of the omnidirectional mobile robot and shows the relationship between the number of intersection points and the column full rank. Based on these illustrations, we can quickly judge whether the mobile system can achieve omnidirectional movement using only wheel configurations.

3.3. Three-Mecanum-Wheel Configurations of the Mobile Robot

4.1. Judging the Four-Mecanum-Wheel Configurations by a Bottom-Roller Axle Intersections Approach

This work was financially supported by the National Natural Science Foundation of China (no. 51675518), Six Talent Peaks Project in Jiangsu Province (no. JXQC-008), China Scholarship Council (no. 201706425041), Jiangsu Government Scholarship for Overseas Studies (no. JS-2018-152), Science Foundation of Xuzhou University of Technology (no. XKY2018129), and the Priority Academic Program Development of Jiangsu Higher Education Institutions.

We would like to thank Robert Bauer of Stevens Institute of Technology for his advice. 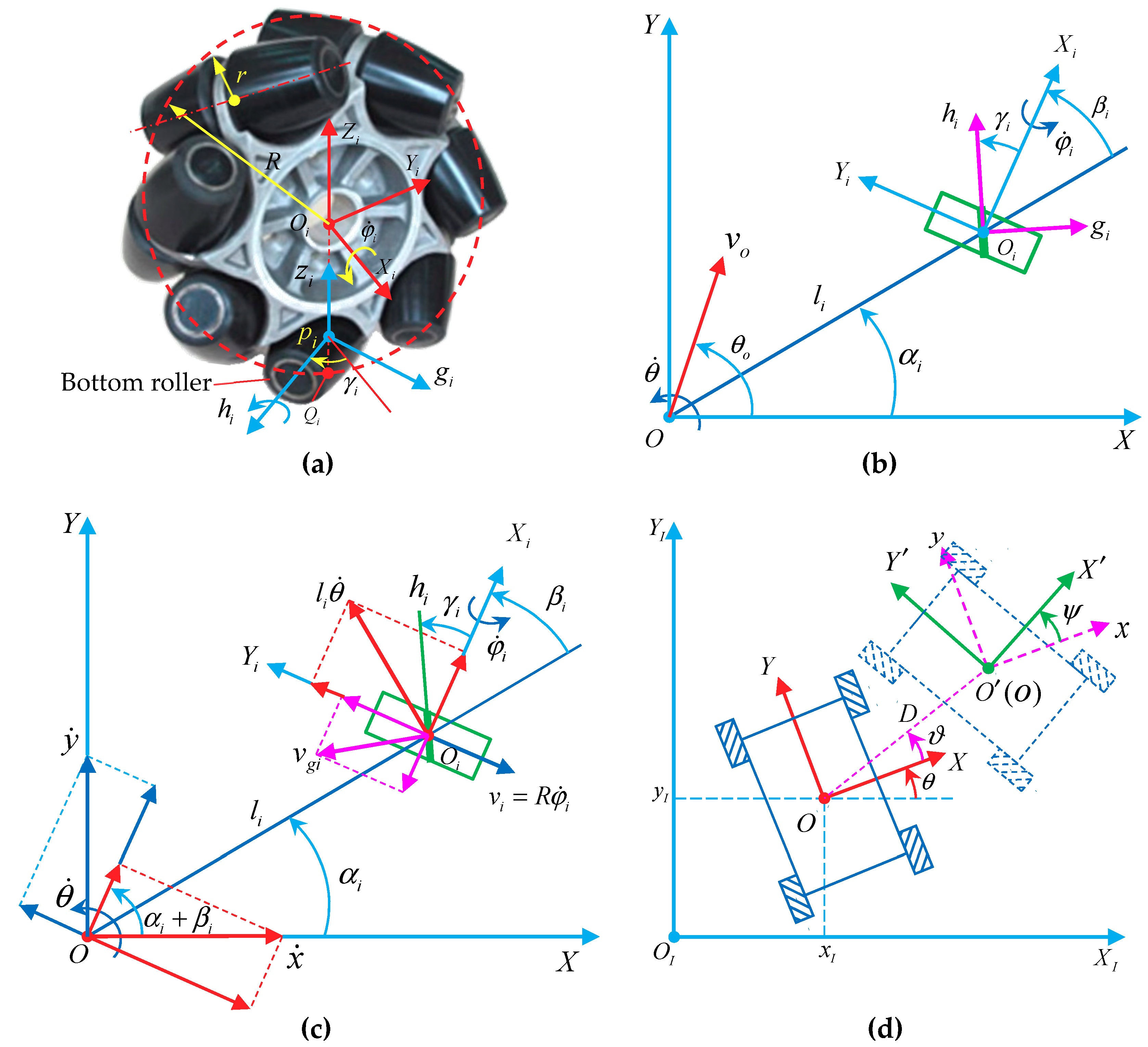 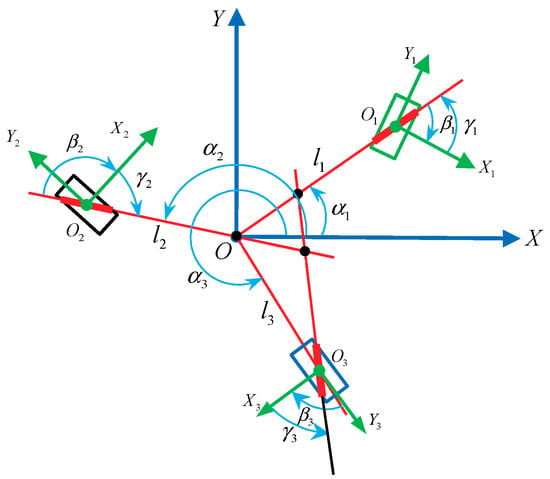 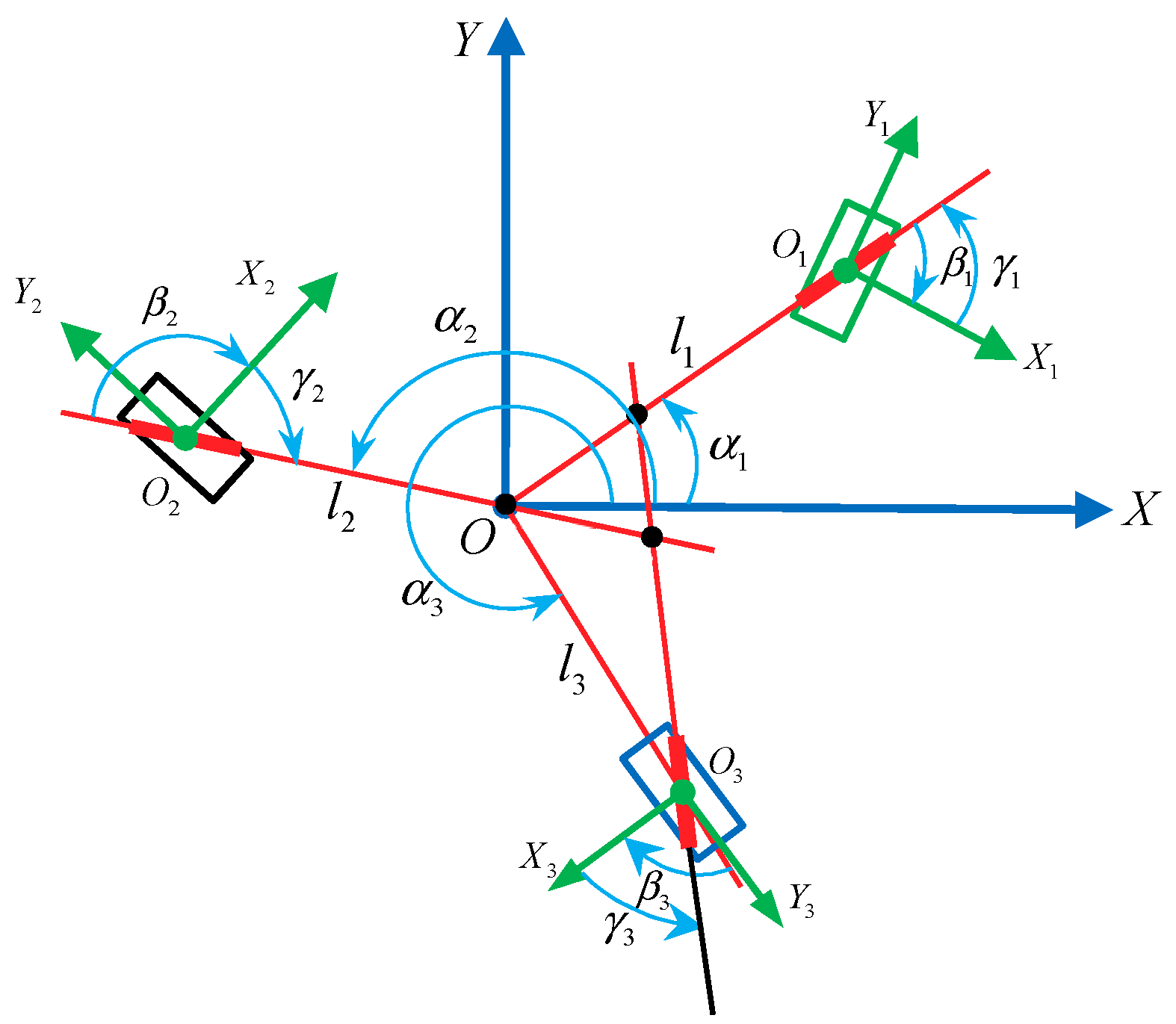 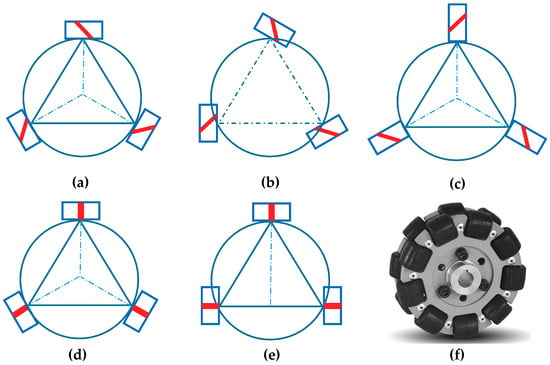 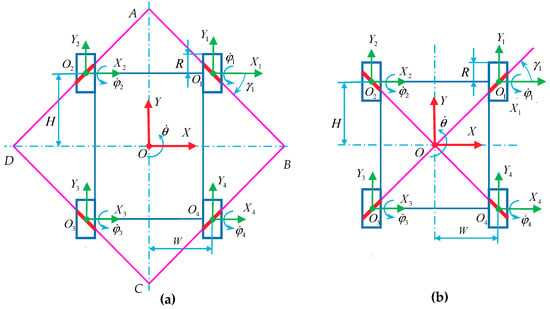 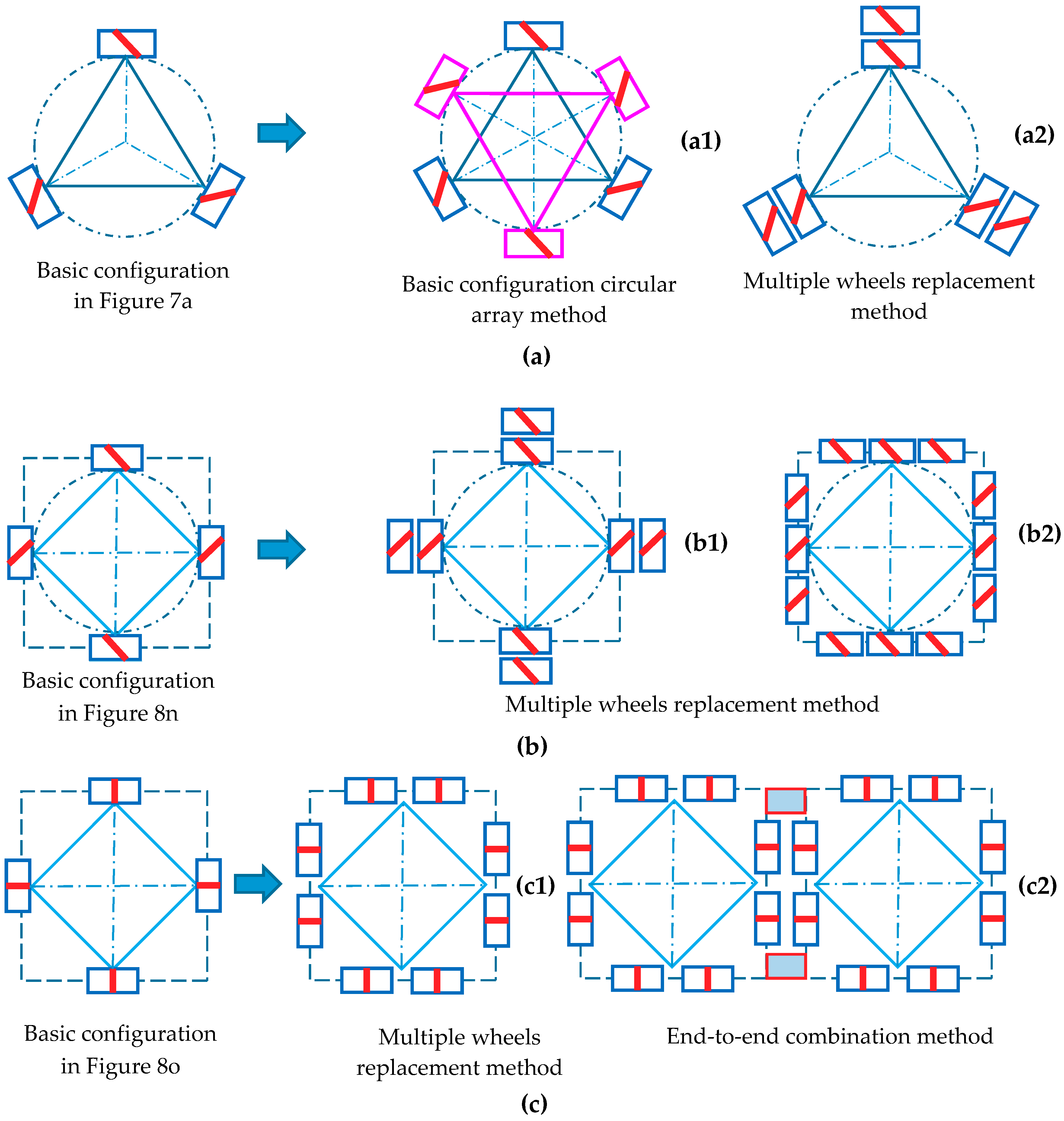 Table 6. Characteristics of the Mecanum wheel configurations in Figure 8.
Table 6. Characteristics of the Mecanum wheel configurations in Figure 8.
Note: Y = the Jacobian matrix is a column full-rank matrix, N = not; n = the mobile robot system does not have omnidirectional mobility capacity; B = the omnidirectional motion capacity is not good; G = good motion capacity.
© 2019 by the authors. Licensee MDPI, Basel, Switzerland. This article is an open access article distributed under the terms and conditions of the Creative Commons Attribution (CC BY) license (http://creativecommons.org/licenses/by/4.0/).
We use cookies on our website to ensure you get the best experience. Read more about our cookies here.
Accept
We have just recently launched a new version of our website. Help us to further improve by taking part in this short 5 minute survey here. here.
Never show this again