“Nothing Is Like It Was Before”: The Dynamics between Land-Use and Land-Cover, and Livelihood Strategies in the Northern Vietnam Borderlands
Previous Article in Journal

Why Don’t More Farmers Go Organic? Using A Stakeholder-Informed Exploratory Agent-Based Model to Represent the Dynamics of Farming Practices in the Philippines

Illegal occupation of argan forest parcels by local households is a new phenomenon in South West Morocco. This is primarily due to the weakening of traditional common control systems and to the boom of the argan oil price. The scope of this work is to develop a decision support system based on dynamic spatial modelling, allowing to anticipate the land tenure dynamics and their impact on forest stand degradation under different policy scenarios. The model simulates the change of land possession by locals and the forest stand degradation levels. The methodological approach combines a Markov chain analysis (MCA) with stakeholders’ preferences for land tenure. First, parcels’ transition probabilities are computed using the MCA. Second, the acquiring suitability map is derived from multi-criteria evaluation procedure (AHP) using biophysical and socio-economic data. Finally, uncertainty is introduced in the simulation based on probabilistic analysis for supporting socio-economic diversity and non-mechanistic human behavior. The modelling approach was successfully used to compare three scenarios: business as usual (continuation of illegal acquiring), total disengagement of the population and private/public partnership with incentives for restoring argan parcel. The model yields geographic information about (i) the magnitude of the on-going process; (ii) the potential occurrence of land use conflicts induced by new policies; and (iii) the location of land conservation or degradation hot-spots. The outcomes of the “business as usual” and of the “total disengagement” models were similar over a 30-year simulation period: in both cases, the proportion of “highly degraded” parcels was doubled and the number of “quite degraded” parcels was increased by 50%. On the other hand, should the private/public partnership effectively work, about 40% of the parcels could be restored to a sustainable level. View Full-Text
Keywords: spatial modelling; multicriteria evaluation; Markov chain analysis; entity based; stakeholder’s preferences; incentives mechanisms; argan forest dynamics spatial modelling; multicriteria evaluation; Markov chain analysis; entity based; stakeholder’s preferences; incentives mechanisms; argan forest dynamics
►▼ Show Figures 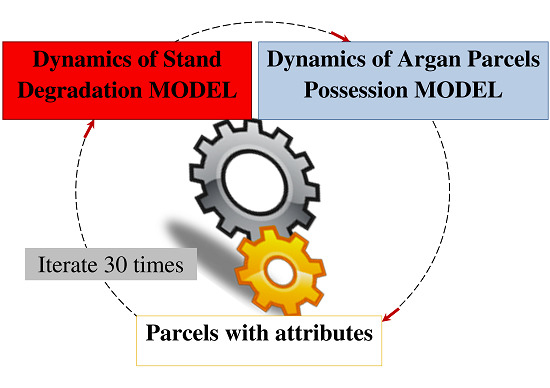