Several studies have shown concern over nitrate and nitrite contamination of prepared infant formula used by infants less than six months old, as it may lead to methemoglobinemia and death. One possible source of contamination is through the use of improperly treated drinking water. Contamination of water could result from fertilizers and manure runoff, not fully treated and released human and industrial waste, or from disinfection processes. In the United Arab Emirates (UAE), bottled water is the major source of drinking water and may be used for the preparation of infant formula. Therefore, in this study, several bottled water brands that are sold on the UAE market, and could be used for preparation of infant formula, were tested for nitrate and nitrite and other anions to show their compatibility with the permissible levels of the United States Environmental Protection Agency (U.S. EPA), United States Food and Drug Administration/Code of Federal Regulations (U.S. FDA/CFR), and other international organizations. All the bottled water samples demonstrated nitrate, nitrite, and other anions levels below the permissible levels accepted by U.S. EPA, U.S. FDA/CFR, and other international organizations, except for one sample that showed nitrite levels exceeding the European Commission and Drinking Water Directive (EC/DWD) permissible levels. Such study sheds light on the quality of bottled water sold not only in the UAE and the region, but also in other countries, such as France, since some of them are imported. In addition, the results shed light on the effectiveness of the treatment processes and possible sources of infant formula contamination that can affect the health of infants. View Full-Text
Keywords: nitrate; nitrite; bottled water; infant formula; contamination nitrate; nitrite; bottled water; infant formula; contamination
►▼ Show Figures 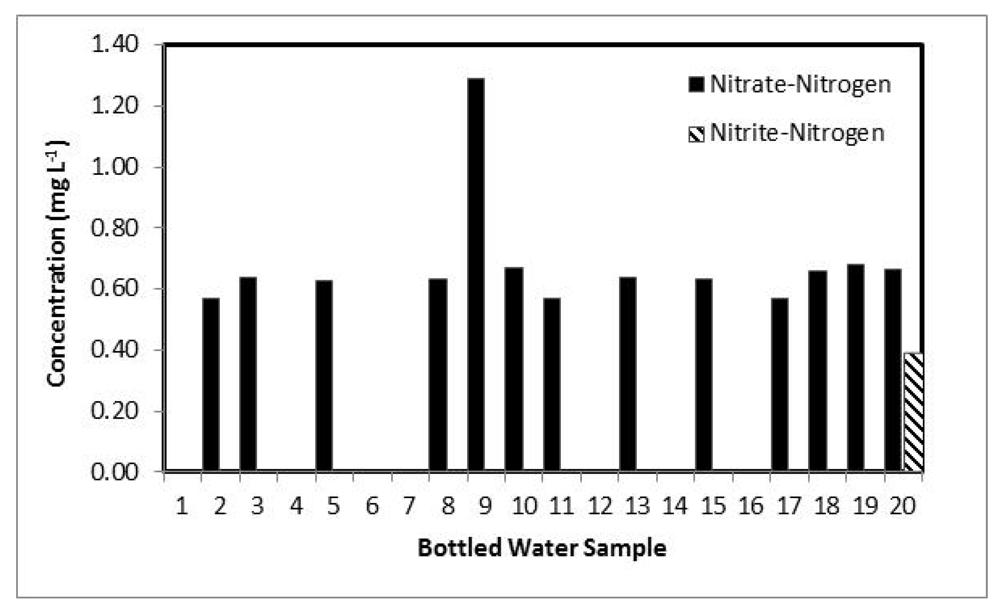