Sediment and Nutrient Retention in Ponds on an Agricultural Stream: Evaluating Effectiveness for Diffuse Pollution Mitigation
Previous Article in Journal

Peculiarities of Hydrodynamics of Small Surface Water Bodies in Zones of Active Technogenesis (on the Example of the Verkhne-Zyryansk Reservoir, Russia)

:
As a rule, large modern industrial complexes are significant water users. This raises the problem of providing them with reliable and sustainable water supply systems. To solve this problem, relatively small, special reservoirs for technical water supply are often created. When creating them, it is a priori assumed that their water masses will be comparatively homogeneous over the aquatorium and throughout the depths, and so, therefore, that their flushing can be successfully used to prevent a possible accumulation of pollutants. The experience of operating such reservoirs in the Verkhnekamsky potassium and magnesium salt development zone in Ural, Russia, has shown that, due to intense diffuse pollution, the reservoirs are characterized by significant vertical non-uniformity, fundamentally altering the hydrodynamics of these water bodies. Based on a series of research, including field observations and computational experiments, the present paper reveals that the vertical non-uniformity of water masses plays a key role in ensuring the sustainability of technical water supply.
Keywords:
reservoir; vertical stratification; sustainability of water use

2. Materials and Methods of Field Measurements

In water bodies located in zones of active technogenesis characterized by dispersed, diffuse sources of pollution, the low flow velocities are responsible for the formation of stable vertical density stratification. In this case, the specific electrical conductivity, and the salinity of water in the lower bottom horizons, can almost reach an order of magnitude higher than their values in the surface layer. As shown in [36], a stable vertical structure is formed and observed at the density of Froude numbers at Frρ <1.5. The phenomenon of vertical density stratification of water masses caused by the inhomogeneous distribution of both temperature and mineralization has long been a hotly debated issue [12,13,14,15,16,17,18,19,20,21,22,23,24,25,26,27,28,29,30,31,32].
In the present paper, using the specific example of the Verkhne-Zyryansk reservoir, we considered the effect of vertical density stratification, formed as a result of uncontrolled, diffuse pollution, on the stability of the intake system providing technical water supply from this reservoir. It was shown that the traditional system of organizing water intakes, which are built under the assumption of the vertical homogeneity of water masses, cannot ensure their reliable operation in winter. The weirs, designed according to the condition of vertical homogeneity of water masses, cannot provide effective washing of this water body. Therefore, in order to prevent this negative phenomenon at the design stage, it is necessary to select a location for the weir threshold which would allow for the effective washing of the zones of the intake header location. In cases where weir reconstruction is impossible, the selective water intake can be realized by changing the design and location of the water intake.
Monitoring can provide an effective assessment of the state of the water body under consideration only under specific observation conditions. At the same time, in order to solve specific problems of the sustainable, economic use of a water body, it is necessary to analyze situations under possible extreme hydrological regimes.
This problem can be effectively solved by carrying out computational experiments based on hydrodynamic models. The use of traditional shallow water models for these purposes is not justified since they require vertical homogeneity of the water masses. The use of 3D models in the hydrostatic approximation can be ineffective due to the complex morphometry of the water body under consideration. At the same time, 3D hydrodynamic models in the full, non-hydrostatic approximation require very significant computational resources. For this reason, a combined scheme was used in the present paper based on the coupling of the 2D and 3D hydrodynamic models. Previously, this was successfully used to solve a number of topical, applied problems [20,31,32,33,38].
The developed model efficiently reproduces the location of the interface between water masses and its changes depending on the hydrological regime of the reservoir. The expected outcome of this model was the assessment of the possibility of water body flushing at extremely high-water flow rates. The calculations showed that, due to the design features of the culvert, washing of the reservoir is impossible. Therefore, to ensure a sustainable technical water supply, it was proposed to reconstruct the heads of the water intake device. Since the process of the formation of the lower water layer’s increased salinity is rather inertial, it is necessary to provide timely detection of this highly unfavorable phenomenon by means of creating an effective monitoring system for water bodies which consider the distribution of monitored indicators over the depth of the water body.

In the water bodies located in zones of active technogenesis, characterized by developed, dispersed, and diffuse sources of pollution, a steady state vertical density stratification is formed at low-flow velocities. A significant vertical inhomogeneity of the mineralization and water temperature distributions has a significant impact on the character of and effective use of these water bodies. This influence is most apparent in the designs of systems for taking water of a required quality, since water intakes within the bottom location of intake windows begin to take water of much poorer quality compared to that in the surface horizons. To prevent such negative phenomena, it is necessary at the design stage to determine the location of the weir threshold which would allow effective flushing in the zones where intake heads are located. In the case when the reconstruction of the weir is impossible, the selective water intake can be realized by changing the design and location of the water intake device.
It is advisable to study the design features of the water intake device on the basis of computational experiments in a 3D formulation. It should be emphasized that the hydrodynamic models of shallow water, which are currently used for solving the applied problems, have proven to be ineffective in this regard since they a priori assume the vertical non-uniformity of water masses. They can be used as a highly effective auxiliary tool in the construction and implementation of 3D hydrodynamic models in the non-hydrostatic approximation. Such an approach, based on the conjunction of hydrodynamic models in 2D and 3D formulations, allows for a significant reduction of the required computational resources.

This research was funded by the Russian Science Foundation, grant number 17-77-20093.

The study did not involve humans or animals.

The study did not involve humans.

The study did not involve any data. 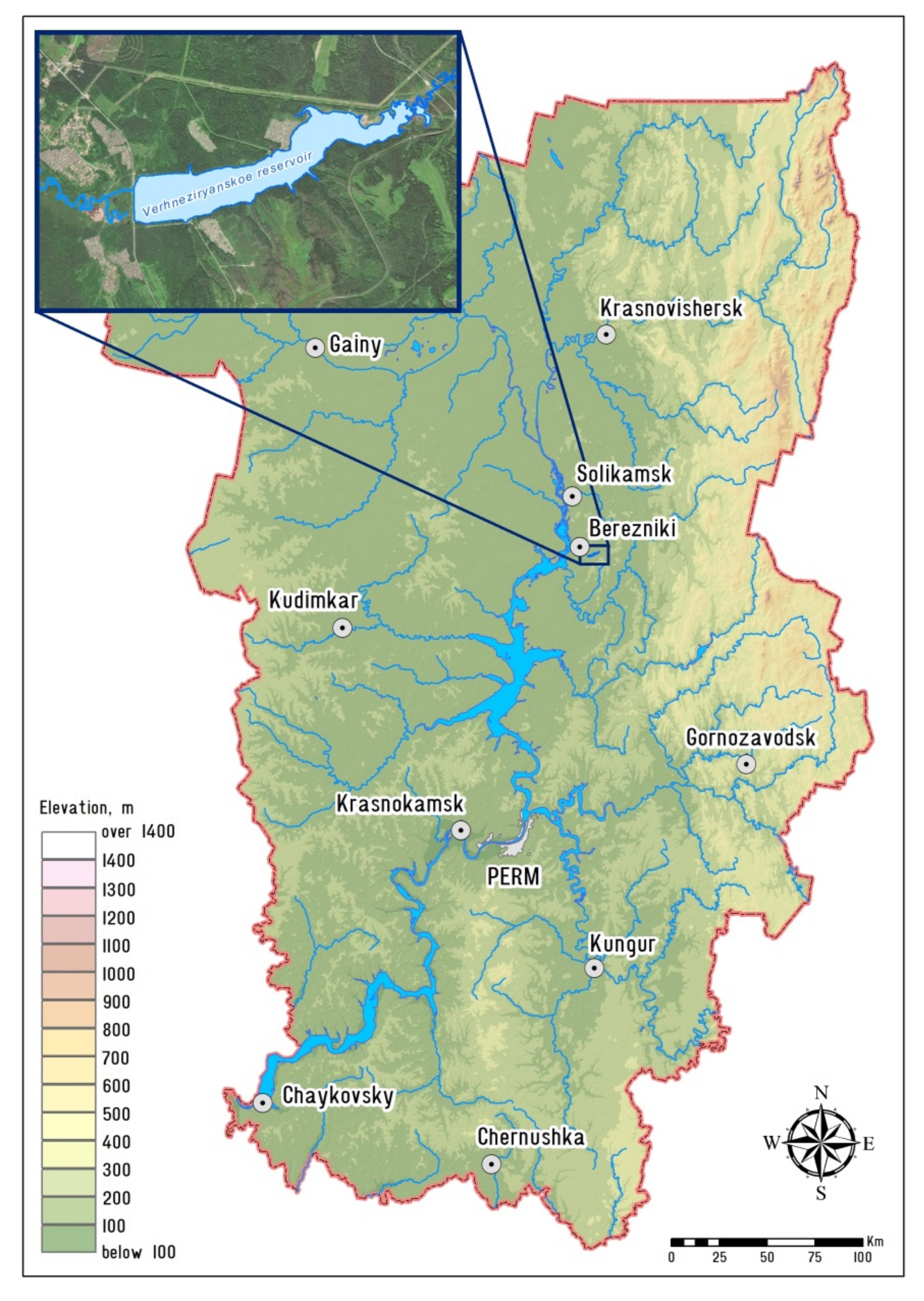 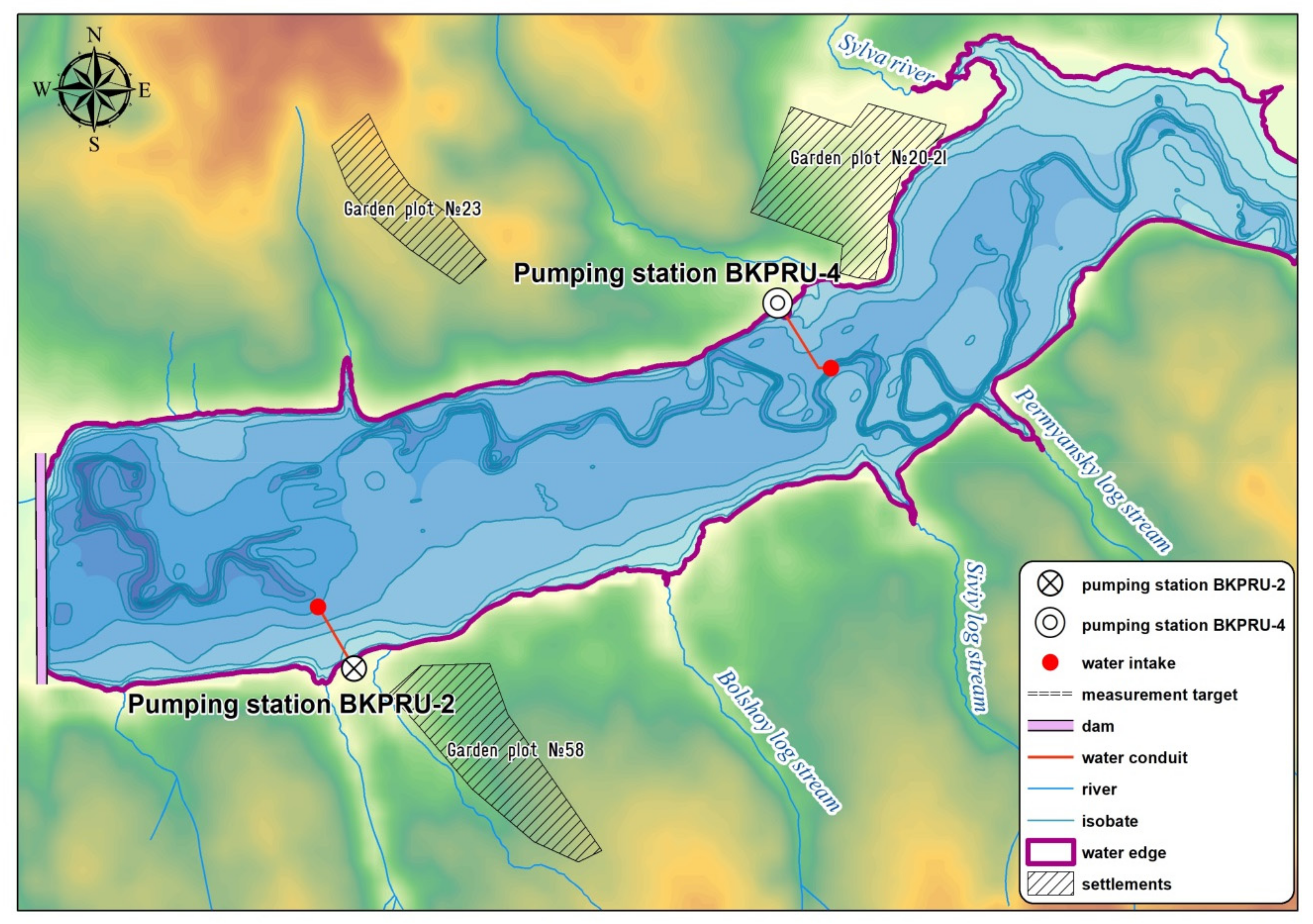 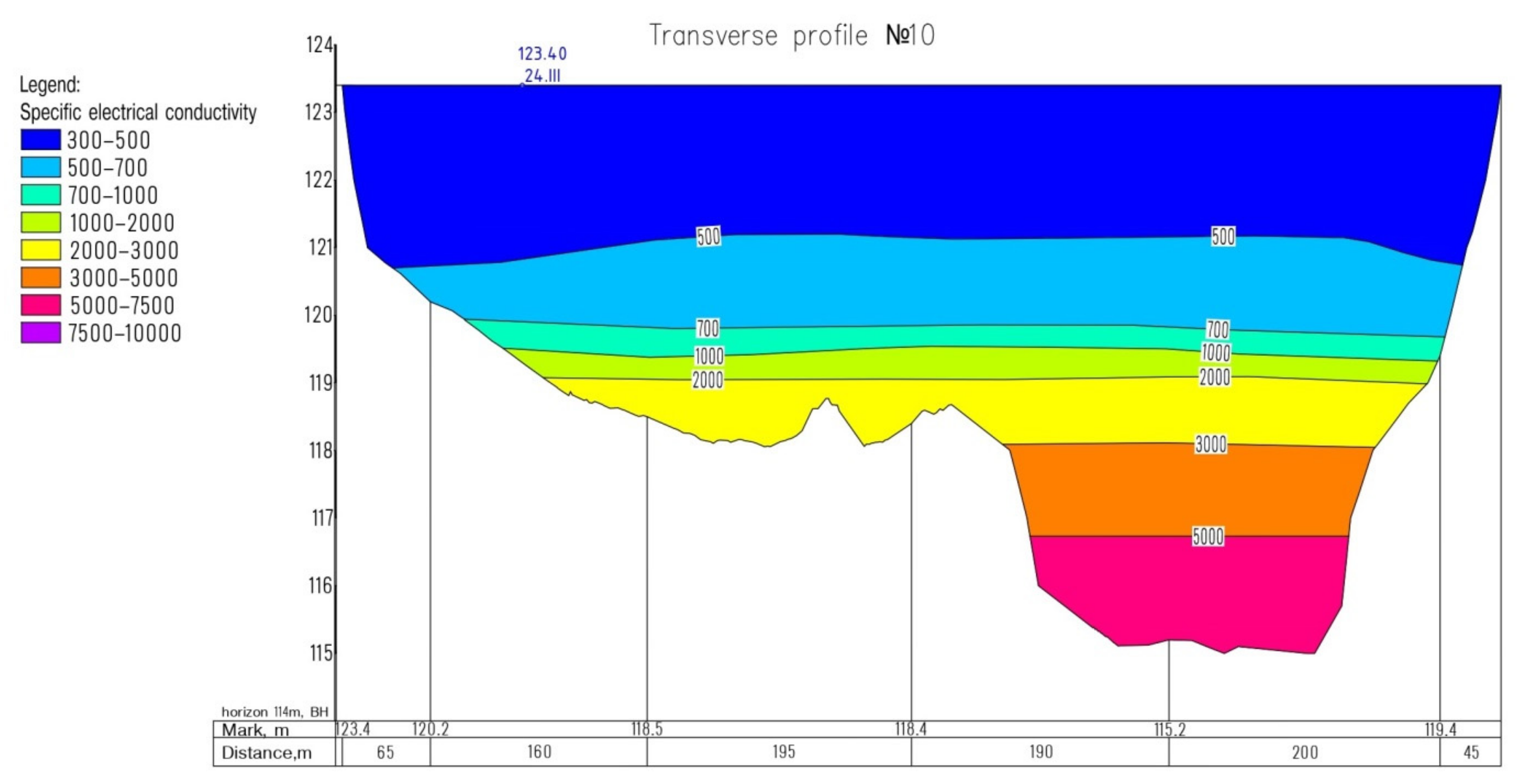 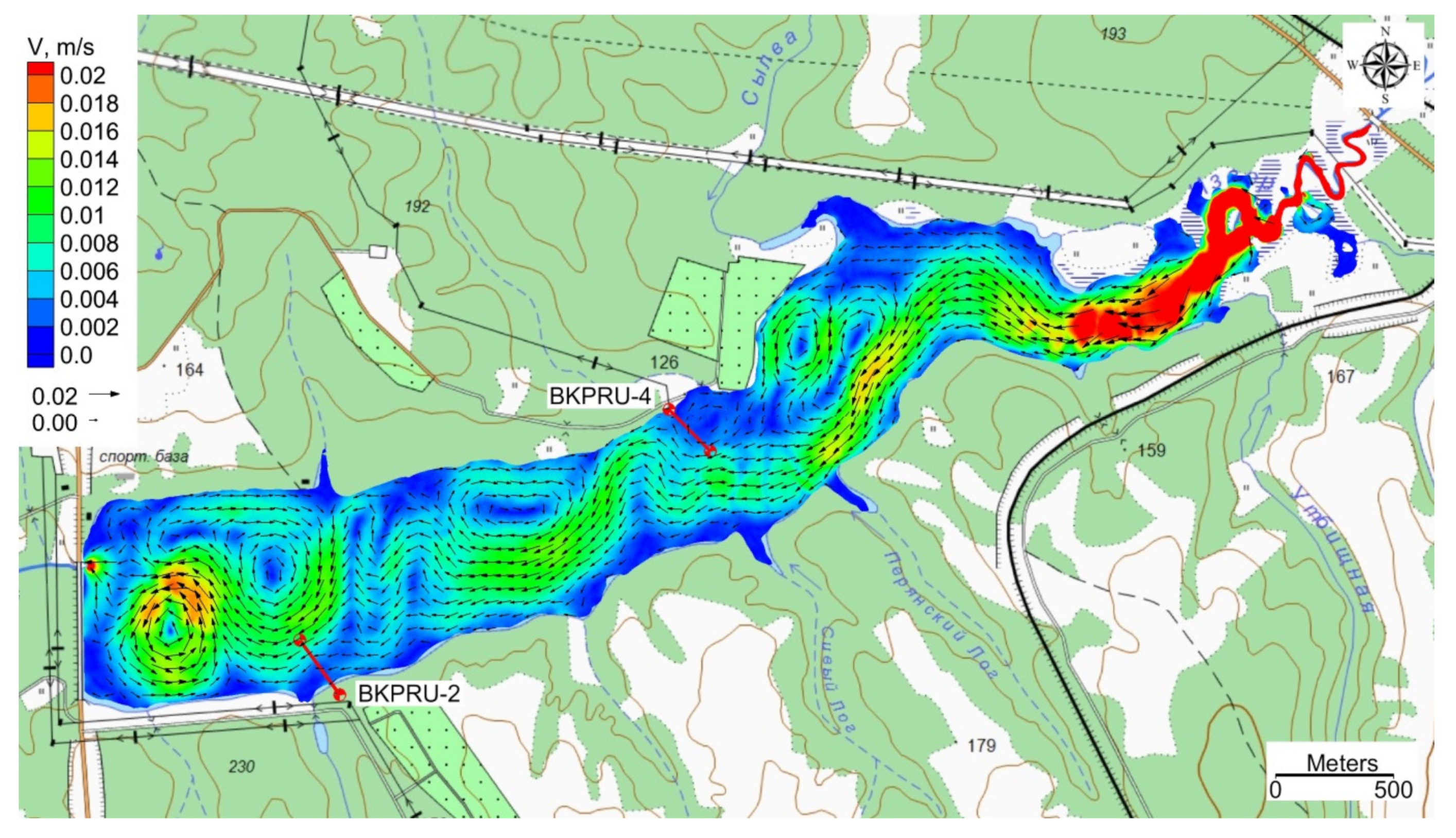 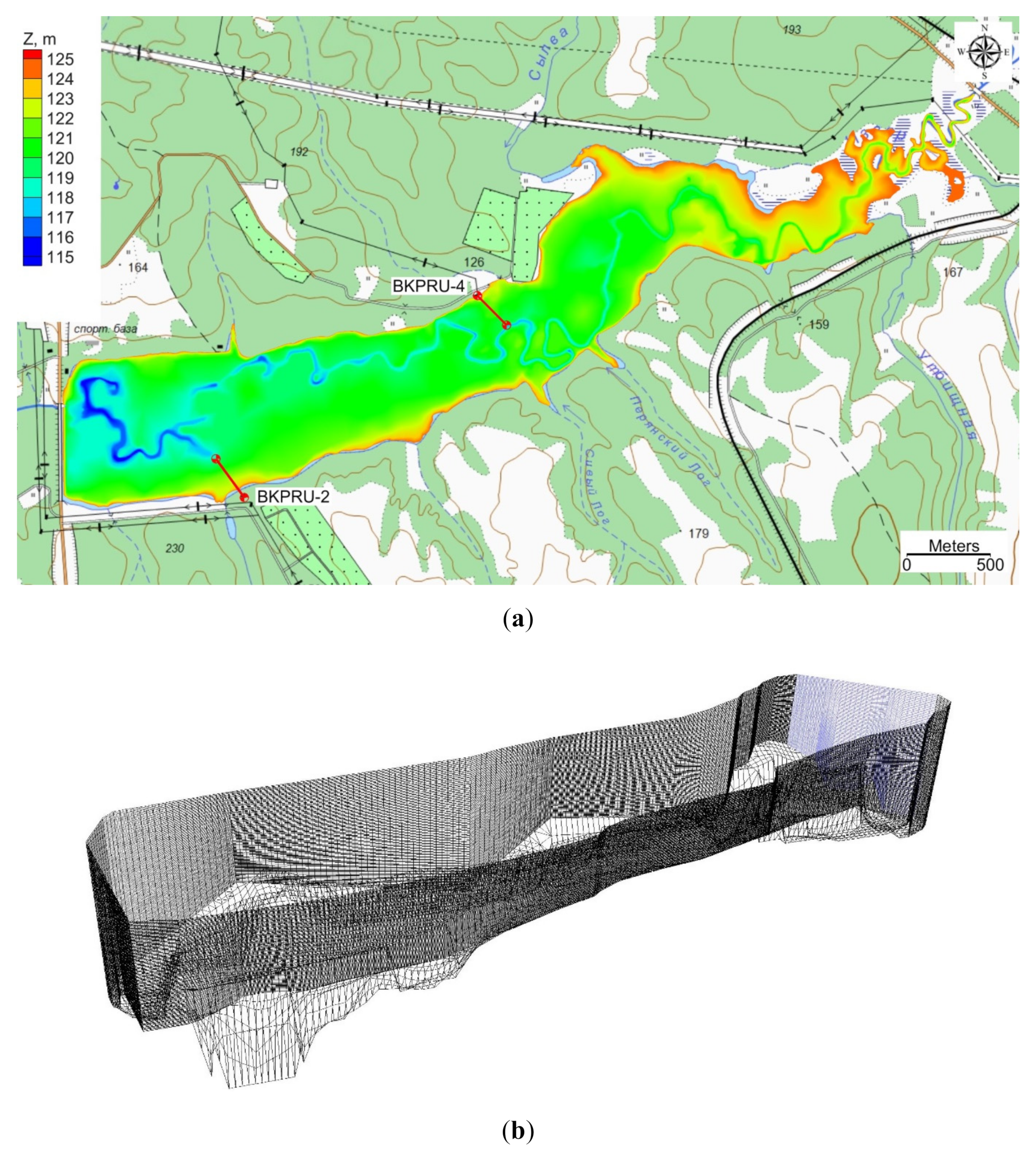