Estimation and Mapping of the Transmissivity of the Nubian Sandstone Aquifer in the Kharga Oasis, Egypt

The outburst flood of the Baige landslide dam caused tremendous damage to infrastructure, unfinished hydraulic buildings, roads, and bridges that were built or under construction along the Jinsha River. Can downstream hydraulic buildings, such as high dams with flood control and discharge function, accommodate outburst floods or generate more serious losses due to wave overtopping? In this study, the unsteady flow of a one-dimensional hydraulic calculation was used to simulate natural flood discharge. Assuming a high dam (Yebatan arch dam) is constructed downstream, the flood processes were carried out in two forms of high dam interception (complete interception, comprehensive flood control of blocking and draining). Moreover, three-dimensional visualization of the inundation area was performed. Simulation results indicate that the Yebatan Hydropower Station can completely eliminate the outburst flood risk even under the most dangerous situations. This station can reduce the flood peak and delay the peak flood arrival time. Specifically, the flood peak decreased more obviously when it was closer to the upstream area, and the flood peak arrival time was more delayed when the flood spread further downstream. In addition, the downstream water depth was reduced by approximately 10 m, and the inundation area was reduced to half of the natural discharge. This phenomenon shows that hydraulic buildings such as high dams can reduce the inundation area of downstream farmlands and extend the evacuation time for downstream residents during the flood process, thus reducing the loss of life and property. View Full-Text
Keywords: Baige landslide dam; natural discharge; flood routing; numerical simulation; high dam interception Baige landslide dam; natural discharge; flood routing; numerical simulation; high dam interception
►▼ Show Figures 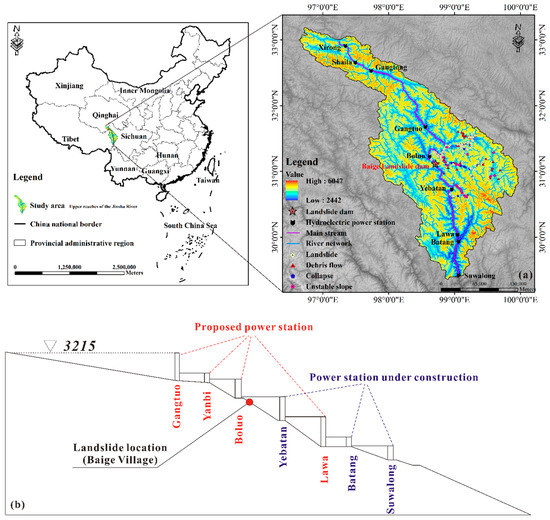