GuEstNBL: The Software for the Guided Estimation of the Natural Background Levels of the Aquifers
Previous Article in Journal

Environmental Flows in the Lower Ebro River and Delta: Current Status and Guidelines for a Holistic Approach

Groundwater quality is a consequence of cumulative effects of natural and anthropogenic processes occurring in unsaturated and saturated zone, which, in certain conditions, can lead to elevated concentrations of chemical substances in groundwater. In this paper, the concept of determining the ambient background value of a chemical substance in groundwater was applied, because the long-term effects of human activity influence the increase in concentrations of substances in the environment. The upper limits of ranges of ambient background values were estimated for targeted chemical substances in four groundwater bodies in the Pannonian region of Croatia, according to the demands of the EU Groundwater Directive. The selected groundwater bodies are typical, according to the aquifer typology, for the Pannonian region of Croatia. Probability plot (PP), the modified Lepeltier method, as well as the simple pre-selection method, were used in this paper, depending on a number of chemical data in analysed data sets and in relation to the proportion of <limit of quantification (LOQ) values in a data set for each groundwater body. Estimates obtained by using PP and the modified Lepeltier method are comparable when data variability is low to moderate, otherwise differences between estimates are notable. These methods should not be used if the proportion of <LOQ values in a data set is higher than 30%; however, the integration of results of both methods can increase the confidence of estimation. If the proportion of <LOQ values is higher than 30%, it is recommended to use the robust pre-selection method with the adequate confidence level. For highly skewed data, the 90th percentile of the pre-selected data set is comparable with other methods and preferable over the 95th percentile. The estimates obtained for inert and mobile substances are comparable on different scales. For highly redox-sensitive substances, estimates may differ by one to two orders of magnitude, in relation to the observed heterogeneity of the aquifer systems. The critical issue in the estimation process is the determination of hydrogeological and geochemical homogeneous units within the heterogeneous aquifer system. View Full-Text
Keywords: ambient background values; probability plot; modified Lepeltier method; pre-selection method; LOQ; groundwater body; Croatia ambient background values; probability plot; modified Lepeltier method; pre-selection method; LOQ; groundwater body; Croatia
►▼ Show Figures 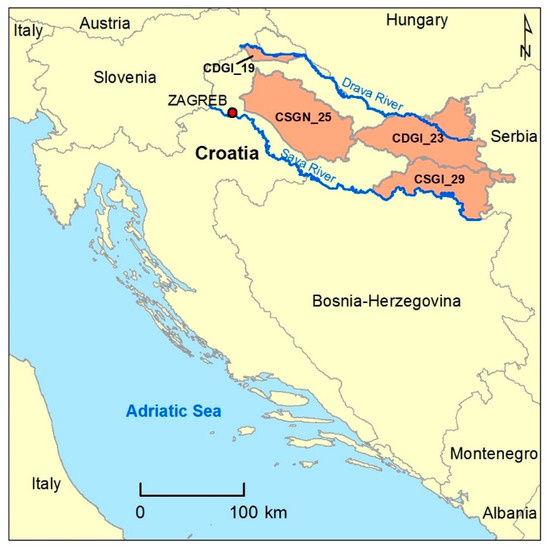