Design annual runoff is a classical issue in traditional univariate hydrological frequency analysis (HFA). We developed a multivariate HFA approach for designs for a study region covering the confluence of two streams. HFA relies on the assumption that probability distribution is consistent in the past, present, and future; however, it has been asserted as incorrect under an uncertain and changing environment. A change-point was detected in our study and adopted to divide runoff into two periods, with no significant trends in all subseries. The post-change design annual runoff witnessed dramatic mean value decline by about half at four frequencies (50%, 75%, 90% and 95%), which were selected in the bivariate analysis. Probability distribution models were constructed with univariate p-III distributions through Clayton, Frank, and Gumbel copulas and independence. Frank copula showed a generally better match with observations than others. The traditional approach, adding up the same-frequency results from both tributaries independently, was disproved by the systematically smaller design values in independence model than copulas and the 40% asynchronous encounter probability. The 25.6% worst synchronous dry-dry encounter situation may be a concern for water resource managers. Consequently, multivariate HFA should prevail as design approach in terms of water resources security. View Full-Text
Keywords: design annual runoff; hydrological frequency analysis; nonstationarity; trend detection; Copula; bivariate joint distribution design annual runoff; hydrological frequency analysis; nonstationarity; trend detection; Copula; bivariate joint distribution
►▼ Show Figures 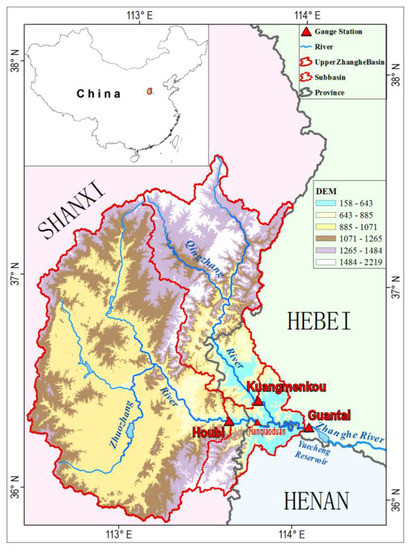