Occurrence, Distribution, and Risk Assessment of Antibiotics in a Subtropical River-Reservoir System
Previous Article in Journal

Wastewater treatment plants (WWTPs) have been identified as potential sources of antibiotic resistance genes (ARGs) but the effects of tertiary wastewater treatment processes on ARGs have not been well characterized. Therefore, the objective of this study was to determine the fate of ARGs throughout a tertiary-stage WWTP. Two ARGs, sul1 and bla, were quantified via quantitative polymerase chain reaction (qPCR) in solids and dissolved fractions of raw sewage, activated sludge, secondary effluent and tertiary effluent from a full-scale WWTP. Tertiary media filtration and chlorine disinfection were studied further with the use of a pilot-scale media filter. Results showed that both genes were reduced at each successive stage of treatment in the dissolved fraction. The solids-associated ARGs increased during activated sludge stage and were reduced in each subsequent stage. Overall reductions were approximately four log10 with the tertiary media filtration and disinfection providing the largest decrease. The majority of ARGs were solids-associated except for in the tertiary effluent. There was no evidence for positive selection of ARGs during treatment. The removal of ARGs by chlorine was improved by filtration compared to unfiltered, chlorinated secondary effluent. This study demonstrates that tertiary-stage WWTPs with disinfection can provide superior removal of ARGs compared to secondary treatment alone. View Full-Text
Keywords: antibiotic resistance genes; wastewater treatment; tertiary media filtration antibiotic resistance genes; wastewater treatment; tertiary media filtration
►▼ Show Figures 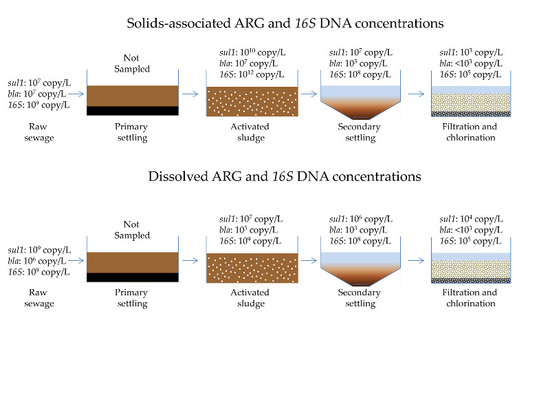