Dylan B. Millet 2 and

We use the Tropospheric Emission Spectrometer (TES) aboard the NASA Aura satellite to determine the concentrations of the trace gases ammonia (NH3) and formic acid (HCOOH) within boreal biomass burning plumes, and present the first detection of peroxy acetyl nitrate (PAN) and ethylene (C2H4) by TES. We focus on two fresh Canadian plumes observed by TES in the summer of 2008 as part of the Arctic Research of the Composition of the Troposphere from Aircraft and Satellites (ARCTAS-B) campaign. We use TES retrievals of NH3 and HCOOH within the smoke plumes to calculate their emission ratios (1.0% ± 0.5% and 0.31% ± 0.21%, respectively) relative to CO for these Canadian fires. The TES derived emission ratios for these gases agree well with previous aircraft and satellite estimates, and can complement ground-based studies that have greater surface sensitivity. We find that TES observes PAN mixing ratios of ~2 ppb within these mid-tropospheric boreal biomass burning plumes when the average cloud optical depth is low ( < 0.1) and that TES can detect C2H4 mixing ratios of ~2 ppb in fresh biomass burning smoke plumes. View Full-Text
Keywords: biomass burning; satellite; TES; formic acid; ammonia; PAN; ethylene biomass burning; satellite; TES; formic acid; ammonia; PAN; ethylene
►▼ Show Figures 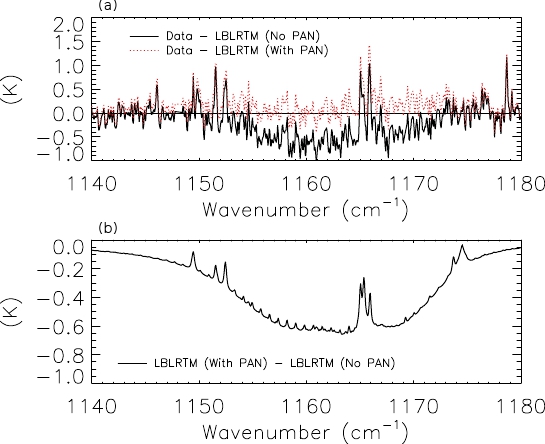